The Empire of Japan aimed to dominate East Asia and was already at war with the Republic of China in 1937, the world war is generally said to have begun on 1 September 1939 with the invasion of Poland by Germany and subsequent declarations of war on Germany by France and the United Kingdom. 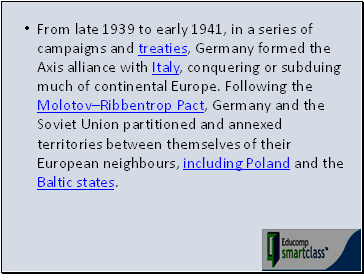 From late 1939 to early 1941, in a series of campaigns and treaties, Germany formed the Axis alliance with Italy, conquering or subduing much of continental Europe. Following the Molotov–Ribbentrop Pact, Germany and the Soviet Union partitioned and annexed territories between themselves of their European neighbours, including Poland and the Baltic states. 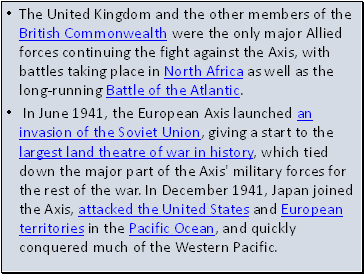 The United Kingdom and the other members of the British Commonwealth were the only major Allied forces continuing the fight against the Axis, with battles taking place in North Africa as well as the long-running Battle of the Atlantic.

In June 1941, the European Axis launched an invasion of the Soviet Union, giving a start to the largest land theatre of war in history, which tied down the major part of the Axis' military forces for the rest of the war. In December 1941, Japan joined the Axis, attacked the United States and European territories in the Pacific Ocean, and quickly conquered much of the Western Pacific. 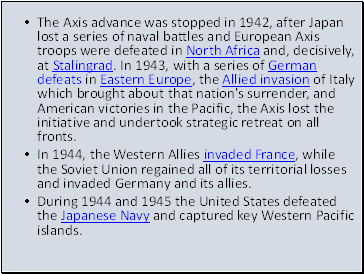 The Axis advance was stopped in 1942, after Japan lost a series of naval battles and European Axis troops were defeated in North Africa and, decisively, at Stalingrad. In 1943, with a series of German defeats in Eastern Europe, the Allied invasion of Italy which brought about that nation's surrender, and American victories in the Pacific, the Axis lost the initiative and undertook strategic retreat on all fronts.

In 1944, the Western Allies invaded France, while the Soviet Union regained all of its territorial losses and invaded Germany and its allies.

During 1944 and 1945 the United States defeated the Japanese Navy and captured key Western Pacific islands. 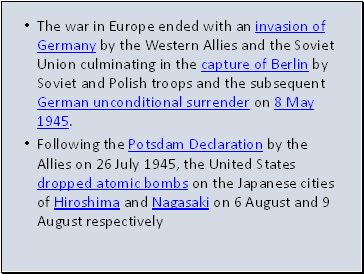 The war in Europe ended with an invasion of Germany by the Western Allies and the Soviet Union culminating in the capture of Berlin by Soviet and Polish troops and the subsequent German unconditional surrender on 8 May 1945.

Following the Potsdam Declaration by the Allies on 26 July 1945, the United States dropped atomic bombs on the Japanese cities of Hiroshima and Nagasaki on 6 August and 9 August respectively 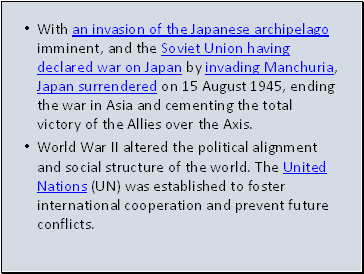 With an invasion of the Japanese archipelago imminent, and the Soviet Union having declared war on Japan by invading Manchuria, Japan surrendered on 15 August 1945, ending the war in Asia and cementing the total victory of the Allies over the Axis.