The Germans split the Army Group South into two groups: Army Group A struck lower Don River while Army Group B struck south-east to the Caucasus, towards Volga River.

The Soviets decided to make their stand at Stalingrad, which was in the path of the advancing German armies. 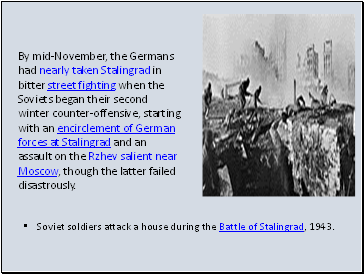 Soviet soldiers attack a house during the Battle of Stalingrad, 1943.

By mid-November, the Germans had nearly taken Stalingrad in bitter street fighting when the Soviets began their second winter counter-offensive, starting with an encirclement of German forces at Stalingrad and an assault on the Rzhev salient near Moscow, though the latter failed disastrously. 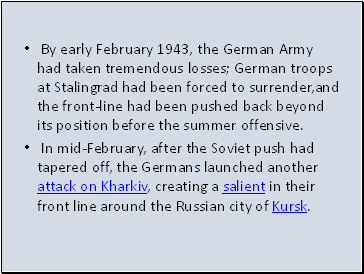 By early February 1943, the German Army had taken tremendous losses; German troops at Stalingrad had been forced to surrender,and the front-line had been pushed back beyond its position before the summer offensive.

In mid-February, after the Soviet push had tapered off, the Germans launched another attack on Kharkiv, creating a salient in their front line around the Russian city of Kursk. 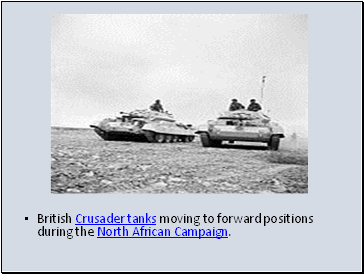 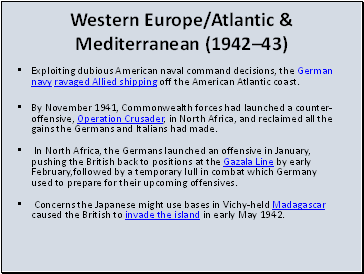 By November 1941, Commonwealth forces had launched a counter-offensive, Operation Crusader, in North Africa, and reclaimed all the gains the Germans and Italians had made.

In North Africa, the Germans launched an offensive in January, pushing the British back to positions at the Gazala Line by early February,followed by a temporary lull in combat which Germany used to prepare for their upcoming offensives.

Concerns the Japanese might use bases in Vichy-held Madagascar caused the British to invade the island in early May 1942. 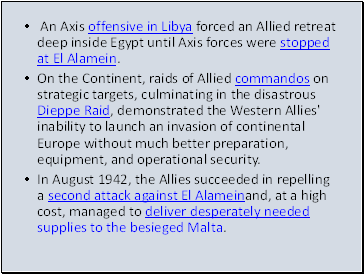 An Axis offensive in Libya forced an Allied retreat deep inside Egypt until Axis forces were stopped at El Alamein.

On the Continent, raids of Allied commandos on strategic targets, culminating in the disastrous Dieppe Raid, demonstrated the Western Allies' inability to launch an invasion of continental Europe without much better preparation, equipment, and operational security.

In August 1942, the Allies succeeded in repelling a second attack against El Alameinand, at a high cost, managed to deliver desperately needed supplies to the besieged Malta. 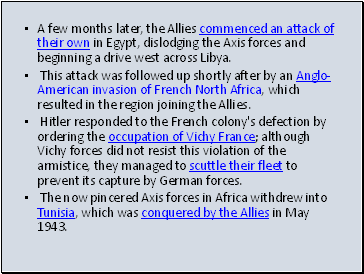