Of Mice and Men
Page
3

John Steinbeck died on December 20, 1968, at his apartment in New York City.

His wife took him home to Salinas to be buried near the land that he spent his life writing about. 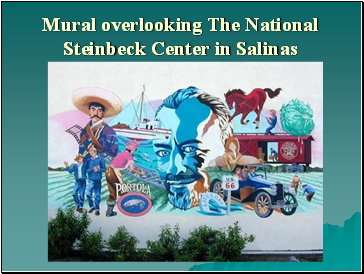 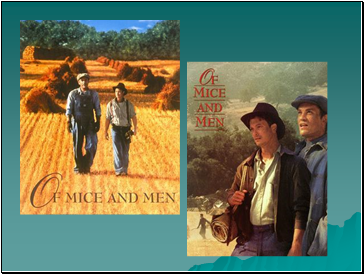 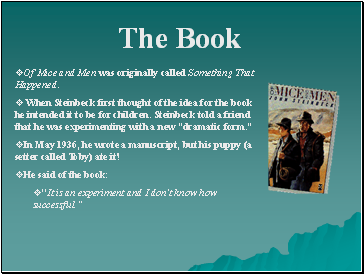 Of Mice and Men was originally called Something That Happened.

When Steinbeck first thought of the idea for the book he intended it to be for children. Steinbeck told a friend that he was experimenting with a new “dramatic form.”

In May 1936, he wrote a manuscript, but his puppy (a setter called Toby) ate it!

He said of the book:

"It is an experiment and I don't know how successful." 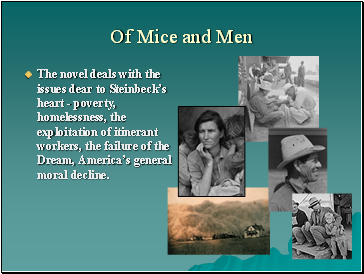 The novel deals with the issues dear to Steinbeck’s heart - poverty, homelessness, the exploitation of itinerant workers, the failure of the Dream, America’s general moral decline. 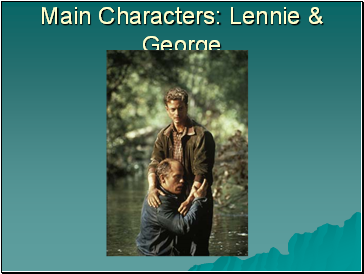 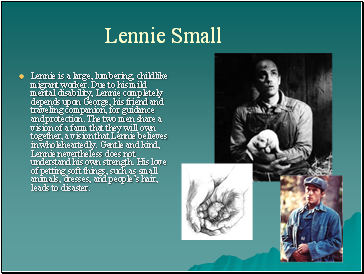 Lennie is a large, lumbering, childlike migrant worker. Due to his mild mental disability, Lennie completely depends upon George, his friend and traveling companion, for guidance and protection. The two men share a vision of a farm that they will own together, a vision that Lennie believes in wholeheartedly. Gentle and kind, Lennie nevertheless does not understand his own strength. His love of petting soft things, such as small animals, dresses, and people’s hair, leads to disaster. 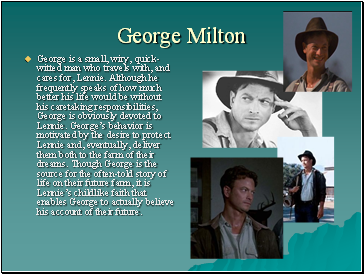 George is a small, wiry, quick-witted man who travels with, and cares for, Lennie. Although he frequently speaks of how much better his life would be without his caretaking responsibilities, George is obviously devoted to Lennie. George’s behavior is motivated by the desire to protect Lennie and, eventually, deliver them both to the farm of their dreams. Though George is the source for the often-told story of life on their future farm, it is Lennie’s childlike faith that enables George to actually believe his account of their future. 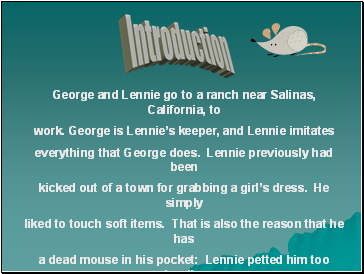 George and Lennie go to a ranch near Salinas, California, to

everything that George does. Lennie previously had been