Of Mice and Men
Page
7 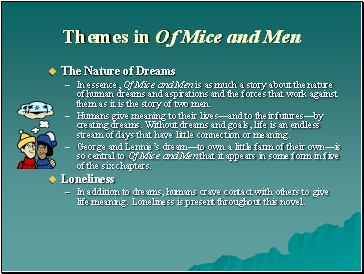 Themes in Of Mice and Men

The Nature of Dreams

In essence, Of Mice and Men is as much a story about the nature of human dreams and aspirations and the forces that work against them as it is the story of two men.

Humans give meaning to their lives—and to their futures—by creating dreams. Without dreams and goals, life is an endless stream of days that have little connection or meaning.

George and Lennie’s dream—to own a little farm of their own—is so central to Of Mice and Men that it appears in some form in five of the six chapters.

In addition to dreams, humans crave contact with others to give life meaning. Loneliness is present throughout this novel. 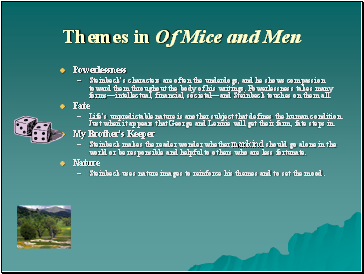 Themes in Of Mice and Men

Steinbeck’s characters are often the underdogs, and he shows compassion toward them throughout the body of his writings. Powerlessness takes many forms—intellectual, financial, societal—and Steinbeck touches on them all.

Life’s unpredictable nature is another subject that defines the human condition. Just when it appears that George and Lennie will get their farm, fate steps in.

Steinbeck makes the reader wonder whether mankind should go alone in the world or be responsible and helpful to others who are less fortunate.

Steinbeck uses nature images to reinforce his themes and to set the mood. 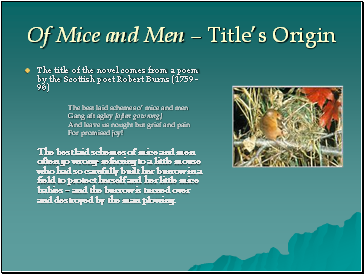 Of Mice and Men – Title’s Origin

And leave us nought but grief and pain

The best laid schemes of mice and men often go wrong- referring to a little mouse who had so carefully built her burrow in a field to protect herself and her little mice babies – and the burrow is turned over and destroyed by the man plowing.