Of Mice and Men
Page
2

was published and became an

awarded the Pulitzer Prize, one

of the most prestigious literary

awards in the world.

stemmed from his experience working

Steinbeck’s experiences in the fields

researching migrant workers led him to

have more compassion for these workers,

and stirred up his concern for social 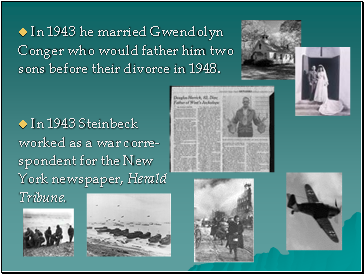 In 1943 he married Gwendolyn

Conger who would father him two

sons before their divorce in 1948.

worked as a war corre- 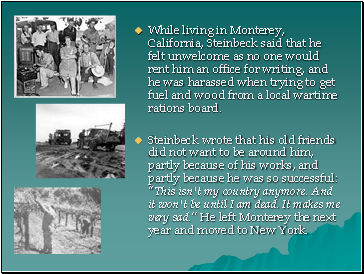 While living in Monterey, California, Steinbeck said that he felt unwelcome as no one would rent him an office for writing, and he was harassed when trying to get fuel and wood from a local wartime rations board.

Steinbeck wrote that his old friends did not want to be around him, partly because of his works, and partly because he was so successful: “This isn't my country anymore. And it won't be until I am dead. It makes me very sad.” He left Monterey the next year and moved to New York. 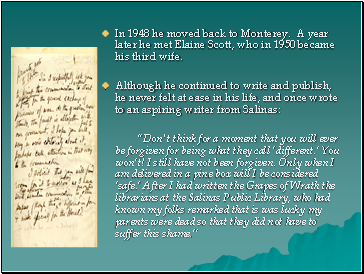 Although he continued to write and publish, he never felt at ease in his life, and once wrote to an aspiring writer from Salinas:

“Don't think for a moment that you will ever be forgiven for being what they call ‘different.’ You won’t! I still have not been forgiven. Only when I am delivered in a pine box will I be considered ‘safe.’ After I had written the Grapes of Wrath the librarians at the Salinas Public Library, who had known my folks remarked that is was lucky my parents were dead so that they did not have to suffer this shame.” 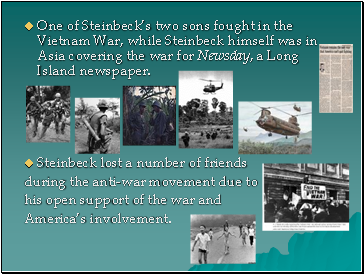 One of Steinbeck’s two sons fought in the Vietnam War, while Steinbeck himself was in Asia covering the war for Newsday, a Long Island newspaper.

Steinbeck lost a number of friends

during the anti-war movement due to

his open support of the war and 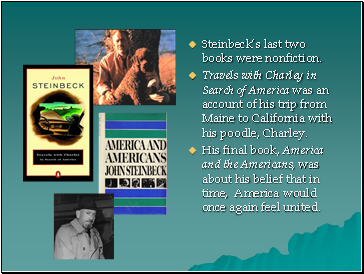 Travels with Charley in Search of America was an account of his trip from Maine to California with his poodle, Charley.

His final book, America and the Americans, was about his belief that in time, America would once again feel united. 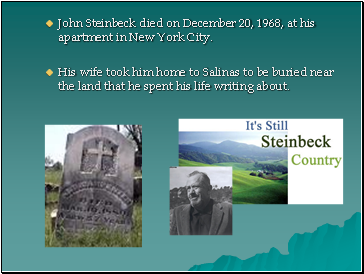