Of Mice and Men
Page
4

kicked out of a town for grabbing a girl’s dress. He simply

liked to touch soft items. That is also the reason that he has

a dead mouse in his pocket: Lennie petted him too hardly.

George promises Lennie that some day they will have their

own farm and raise rabbits as well as other animals. 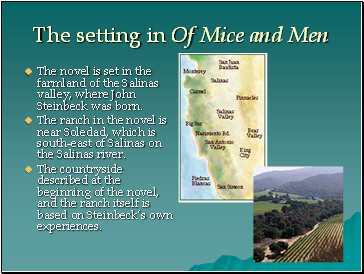 The setting in Of Mice and Men

The novel is set in the farmland of the Salinas valley, where John Steinbeck was born.

The ranch in the novel is near Soledad, which is south-east of Salinas on the Salinas river.

The countryside described at the beginning of the novel, and the ranch itself is based on Steinbeck’s own experiences. 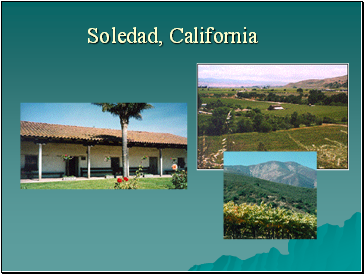 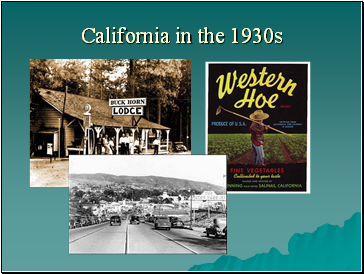 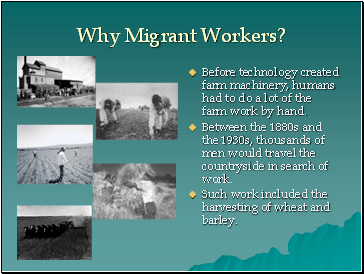 Before technology created farm machinery, humans had to do a lot of the farm work by hand.

Between the 1880s and the 1930s, thousands of men would travel the countryside in search of work.

Such work included the harvesting of wheat and barley. 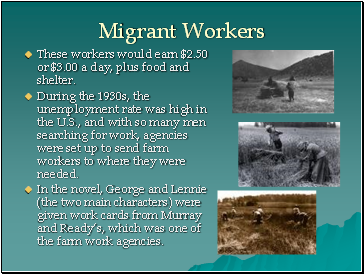 During the 1930s, the unemployment rate was high in the U.S., and with so many men searching for work, agencies were set up to send farm workers to where they were needed.

In the novel, George and Lennie (the two main characters) were given work cards from Murray and Ready’s, which was one of the farm work agencies. 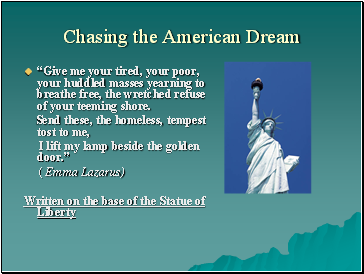 “Give me your tired, your poor, your huddled masses yearning to breathe free, the wretched refuse of your teeming shore.

Send these, the homeless, tempest tost to me,

I lift my lamp beside the golden door.”

Written on the base of the Statue of Liberty 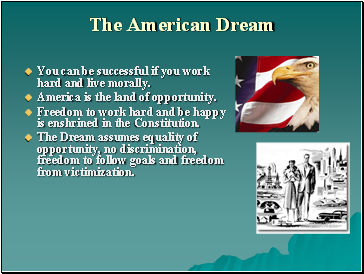 You can be successful if you work hard and live morally.

America is the land of opportunity.

Freedom to work hard and be happy is enshrined in the Constitution.

The Dream assumes equality of opportunity, no discrimination, freedom to follow goals and freedom from victimization. 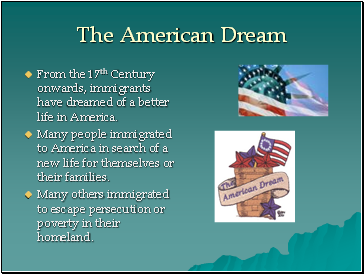 From the 17th Century onwards, immigrants have dreamed of a better life in America.