Of Mice and Men
Page
6 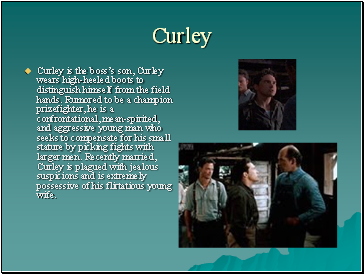 Curley is the boss’s son, Curley wears high-heeled boots to distinguish himself from the field hands. Rumored to be a champion prizefighter, he is a confrontational, mean-spirited, and aggressive young man who seeks to compensate for his small stature by picking fights with larger men. Recently married, Curley is plagued with jealous suspicions and is extremely possessive of his flirtatious young wife. 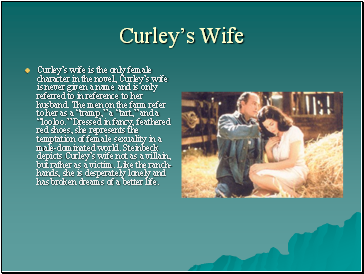 Curley’s wife is the only female character in the novel, Curley’s wife is never given a name and is only referred to in reference to her husband. The men on the farm refer to her as a “tramp,” a “tart,” and a “looloo.” Dressed in fancy, feathered red shoes, she represents the temptation of female sexuality in a male-dominated world. Steinbeck depicts Curley’s wife not as a villain, but rather as a victim. Like the ranch-hands, she is desperately lonely and has broken dreams of a better life. 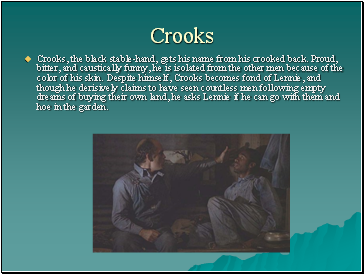 Crooks, the black stable-hand, gets his name from his crooked back. Proud, bitter, and caustically funny, he is isolated from the other men because of the color of his skin. Despite himself, Crooks becomes fond of Lennie, and though he derisively claims to have seen countless men following empty dreams of buying their own land, he asks Lennie if he can go with them and hoe in the garden. 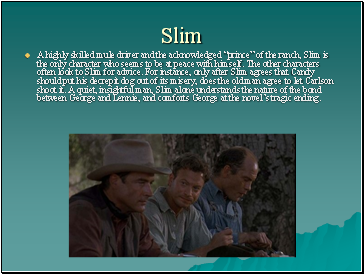 A highly skilled mule driver and the acknowledged “prince” of the ranch, Slim is the only character who seems to be at peace with himself. The other characters often look to Slim for advice. For instance, only after Slim agrees that Candy should put his decrepit dog out of its misery, does the old man agree to let Carlson shoot it. A quiet, insightful man, Slim alone understands the nature of the bond between George and Lennie, and comforts George at the novel’s tragic ending. 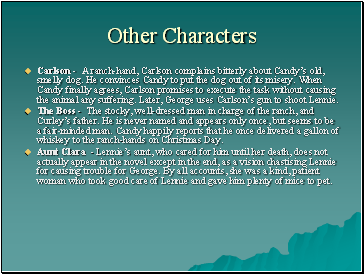 Carlson - A ranch-hand, Carlson complains bitterly about Candy’s old, smelly dog. He convinces Candy to put the dog out of its misery. When Candy finally agrees, Carlson promises to execute the task without causing the animal any suffering. Later, George uses Carlson’s gun to shoot Lennie.

The Boss - The stocky, well-dressed man in charge of the ranch, and Curley’s father. He is never named and appears only once, but seems to be a fair-minded man. Candy happily reports that he once delivered a gallon of whiskey to the ranch-hands on Christmas Day.

Aunt Clara - Lennie’s aunt, who cared for him until her death, does not actually appear in the novel except in the end, as a vision chastising Lennie for causing trouble for George. By all accounts, she was a kind, patient woman who took good care of Lennie and gave him plenty of mice to pet.