Many directives in the authentic statements of Muhammad (Hadiths):

He told his companions as they go home after a battle "We are returning from the lesser jihad [the battle] to the greater jihad, at home"

Personal: That of the soul

Verbal: Raising one's voice in the name of Allah on behalf of justice.

Physical: Combat waged in defense against oppression and transgression. 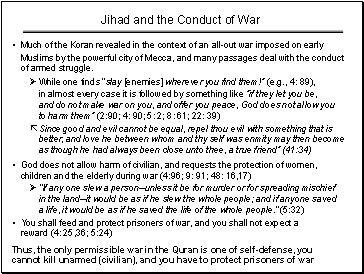 Muslims by the powerful city of Mecca, and many passages deal with the conduct

in almost every case it is followed by something like "if they let you be,

and do not make war on you, and offer you peace, God does not allow you

Since good and evil cannot be equal, repel thou evil with something that is

better, and love he between whom and thy self was enmity may then become

God does not allow harm of civilian, and requests the protection of women,

in the land--it would be as if he slew the whole people; and if anyone saved

You shall feed and protect prisoners of war, and you shall not expect a

Thus, the only permissible war in the Quran is one of self-defense, you

cannot kill unarmed (civilian), and you have to protect prisoners of war 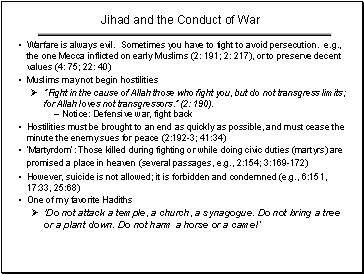 Muslims may not begin hostilities

Hostilities must be brought to an end as quickly as possible, and must cease the minute the enemy sues for peace (2:192-3; 41:34)