• Other dynasties in Egypt, Spain, and parts of the Levant. 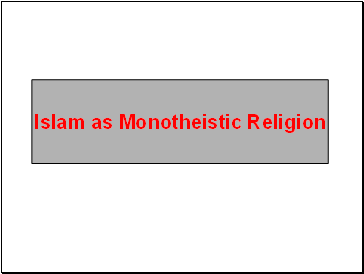 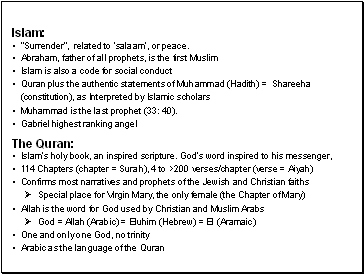 • Abraham, father of all prophets, is the first Muslim

• Islam is also a code for social conduct

• Quran plus the authentic statements of Muhammad (Hadith) = Shareeha (constitution), as Interpreted by Islamic scholars

• Confirms most narratives and prophets of the Jewish and Christian faiths

• Special place for Virgin Mary, the only female (the Chapter of Mary)

• One and only one God, no trinity

• Arabic as the language of the Quran 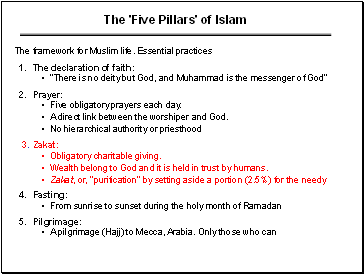 1. The declaration of faith:

"There is no deity but God, and Muhammad is the messenger of God"

A direct link between the worshiper and God.

No hierarchical authority or priesthood

Wealth belong to God and it is held in trust by humans.

Zakat, or, "purification" by setting aside a portion (2.5%) for the needy

From sunrise to sunset during the holy month of Ramadan

A pilgrimage (Hajj) to Mecca, Arabia. Only those who can

The 'Five Pillars' of Islam 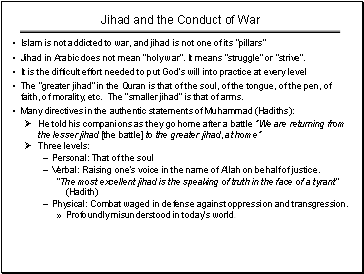 Islam is not addicted to war, and jihad is not one of its "pillars”

Jihad in Arabic does not mean "holy war”. It means "struggle” or “strive”.

The "greater jihad” in the Quran is that of the soul, of the tongue, of the pen, of faith, of morality, etc. The "smaller jihad" is that of arms.