One of my favorite Hadiths

'Do not attack a temple, a church, a synagogue. Do not bring a tree or a plant down. Do not harm a horse or a camel’ 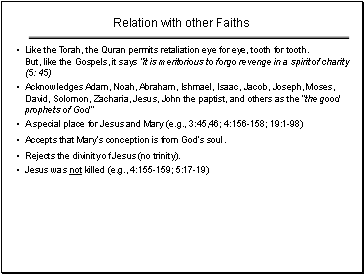 Relation with other Faiths

Like the Torah, the Quran permits retaliation eye for eye, tooth for tooth.

But, like the Gospels, it says “it is meritorious to forgo revenge in a spirit of charity (5: 45)

David, Solomon, Zacharia, Jesus, John the paptist, and others as the “the good prophets of God”

Accepts that Mary’s conception is from God’s soul.

Rejects the divinity of Jesus (no trinity). 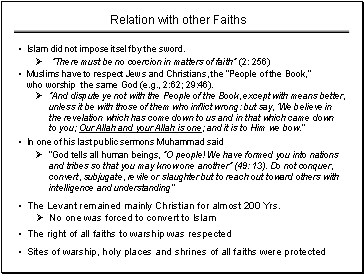 Islam did not impose itself by the sword.

Muslims have to respect Jews and Christians, the "People of the Book,"

"And dispute ye not with the People of the Book, except with means better,

unless it be with those of them who inflict wrong: but say, 'We believe in

to you; Our Allah and your Allah is one; and it is to Him we bow.”

In one of his last public sermons Muhammad said

“God tells all human beings, "O people! We have formed you into nations

convert, subjugate, revile or slaughter but to reach out toward others with

No one was forced to convert to Islam

The right of all faiths to warship was respected

Sites of warship, holy places and shrines of all faiths were protected

Relation with other Faiths 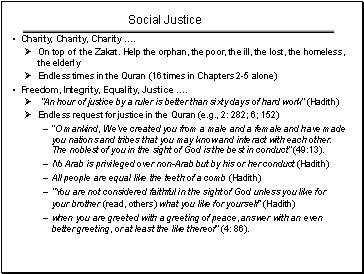 On top of the Zakat. Help the orphan, the poor, the ill, the lost, the homeless, the elderly

“O mankind, We’ve created you from a male and a female and have made

you nations and tribes that you may know and interact with each other.

All people are equal like the teeth of a comb (Hadith)