Figure 41.21 (at right) is a sketch of a lithium atom, which has 3 electrons. The allowed electron states are naturally arranged in shells of different size centered on the nucleus. The n = 1 states make up the K shell, the n = 2 states make up the L shell, and so on. 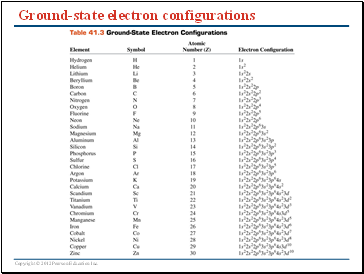 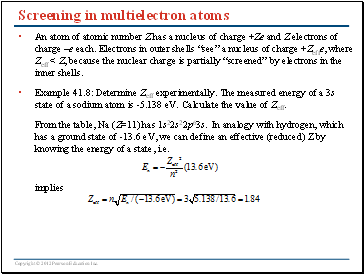 Example 41.8: Determine Zeff experimentally. The measured energy of a 3s state of a sodium atom is -5.138 eV. Calculate the value of Zeff. 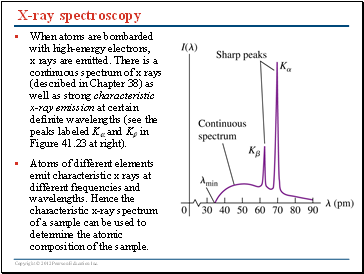 When atoms are bombarded with high-energy electrons, x rays are emitted. There is a continuous spectrum of x rays (described in Chapter 38) as well as strong characteristic x-ray emission at certain definite wavelengths (see the peaks labeled K and K in Figure 41.23 at right).

Atoms of different elements emit characteristic x rays at different frequencies and wavelengths. Hence the characteristic x-ray spectrum of a sample can be used to determine the atomic composition of the sample. 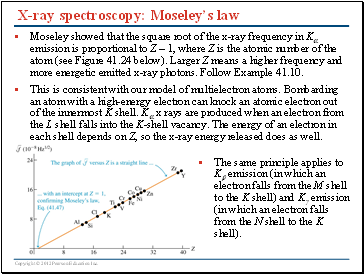 Moseley showed that the square root of the x-ray frequency in K emission is proportional to Z – 1, where Z is the atomic number of the atom (see Figure 41.24 below). Larger Z means a higher frequency and more energetic emitted x-ray photons. Follow Example 41.10.

This is consistent with our model of multielectron atoms. Bombarding an atom with a high-energy electron can knock an atomic electron out of the innermost K shell. K x rays are produced when an electron from the L shell falls into the K-shell vacancy. The energy of an electron in each shell depends on Z, so the x-ray energy released does as well.