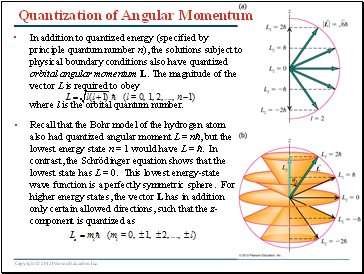 In addition to quantized energy (specified by principle quantum number n), the solutions subject to physical boundary conditions also have quantized orbital angular momentum L. The magnitude of the vector L is required to obey

where l is the orbital quantum number.

Recall that the Bohr model of the hydrogen atom also had quantized angular moment L = nħ, but the lowest energy state n = 1 would have L = ħ. In contrast, the Schrödinger equation shows that the lowest state has L = 0. This lowest energy-state wave function is a perfectly symmetric sphere. For higher energy states, the vector L has in addition only certain allowed directions, such that the z-component is quantized as 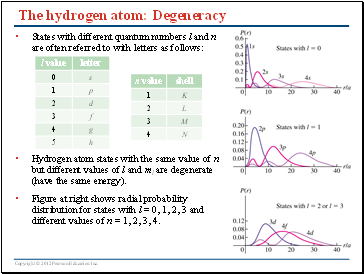 States with different quantum numbers l and n are often referred to with letters as follows:

Hydrogen atom states with the same value of n but different values of l and ml are degenerate (have the same energy). 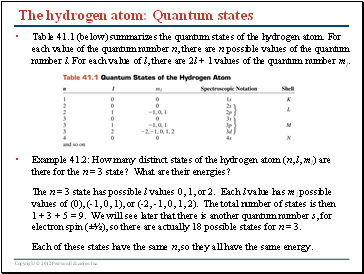 Example 41.2: How many distinct states of the hydrogen atom (n, l, ml) are there for the n = 3 state? What are their energies? 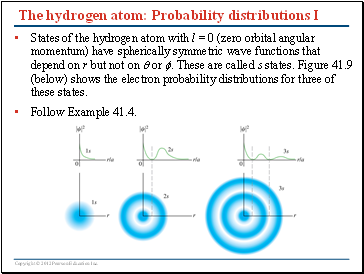 The hydrogen atom: Probability distributions I

States of the hydrogen atom with l = 0 (zero orbital angular momentum) have spherically symmetric wave functions that depend on r but not on  or . These are called s states. Figure 41.9 (below) shows the electron probability distributions for three of these states. 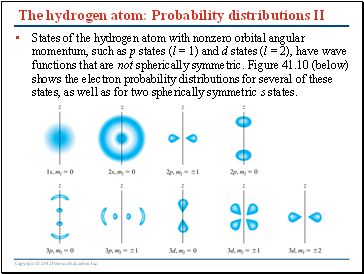