These obviously have the same solutions separately as our original particle in an infinite square well, and corresponding energies: 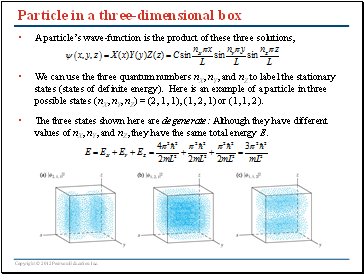 A particle’s wave-function is the product of these three solutions,

The three states shown here are degenerate: Although they have different values of nX, nY, and nZ, they have the same total energy E. 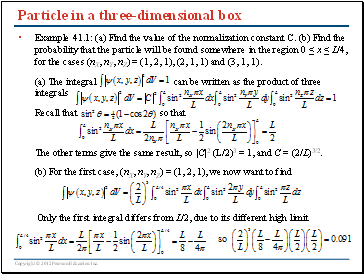 Recall that so that

Only the first integral differs from L/2, due to its different high limit 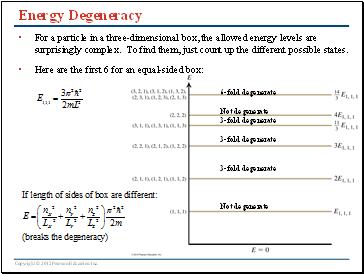 For a particle in a three-dimensional box, the allowed energy levels are surprisingly complex. To find them, just count up the different possible states.

Here are the first 6 for an equal-sided box: 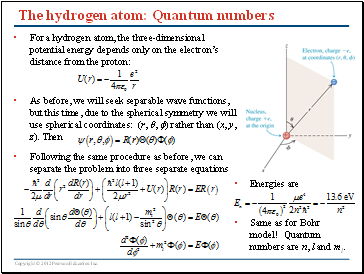 Same as for Bohr model! Quantum numbers are n, l and ml.

For a hydrogen atom, the three-dimensional potential energy depends only on the electron’s distance from the proton:

As before, we will seek separable wave functions, but this time, due to the spherical symmetry we will use spherical coordinates: (r, , ) rather than (x, y, z). Then

Following the same procedure as before, we can separate the problem into three separate equations 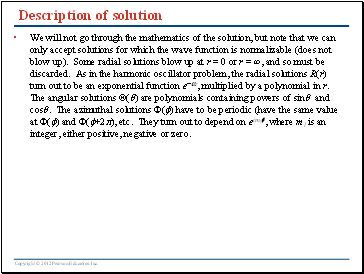 We will not go through the mathematics of the solution, but note that we can only accept solutions for which the wave function is normalizable (does not blow up). Some radial solutions blow up at r = 0 or r = ∞, and so must be discarded. As in the harmonic oscillator problem, the radial solutions R(r) turn out to be an exponential function e-ar, multiplied by a polynomial in r. The angular solutions Q(q) are polynomials containing powers of sinq and cosq. The azimuthal solutions F(f) have to be periodic (have the same value at F(f) and F(f+2p), etc. They turn out to depend on eimlf, where ml is an integer, either positive, negative or zero.