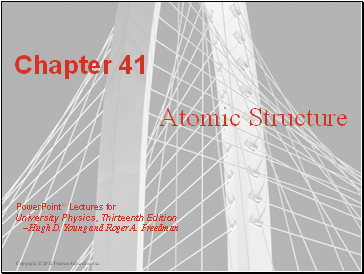 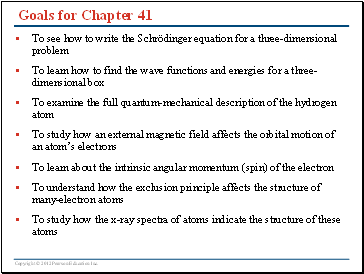 To examine the full quantum-mechanical description of the hydrogen atom

To learn about the intrinsic angular momentum (spin) of the electron 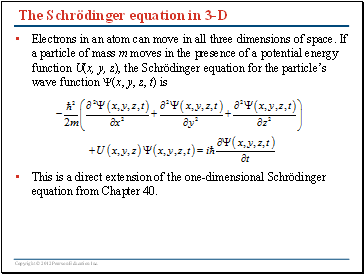 The Schrödinger equation in 3-D

Electrons in an atom can move in all three dimensions of space. If a particle of mass m moves in the presence of a potential energy function U(x, y, z), the Schrödinger equation for the particle’s wave function (x, y, z, t) is

This is a direct extension of the one-dimensional Schrödinger equation from Chapter 40. 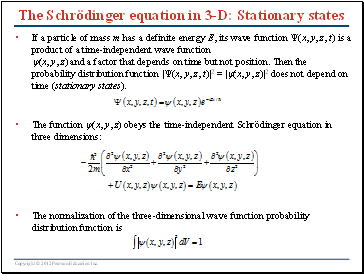 If a particle of mass m has a definite energy E, its wave function (x, y, z, t) is a product of a time-independent wave function (x, y, z) and a factor that depends on time but not position. Then the probability distribution function |(x, y, z, t)|2 = |(x, y, z)|2 does not depend on time (stationary states). 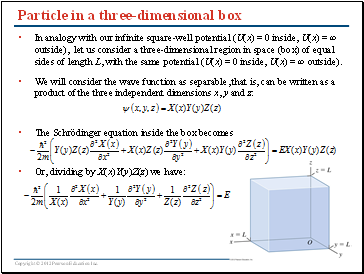 We will consider the wave function as separable, that is, can be written as a product of the three independent dimensions x, y and z:

The Schrödinger equation inside the box becomes 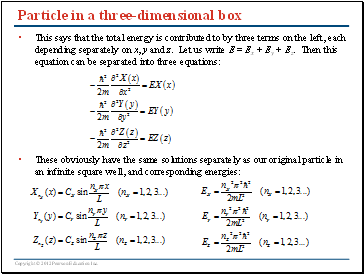 This says that the total energy is contributed to by three terms on the left, each depending separately on x, y and z. Let us write E = Ex + Ey + Ez. Then this equation can be separated into three equations: