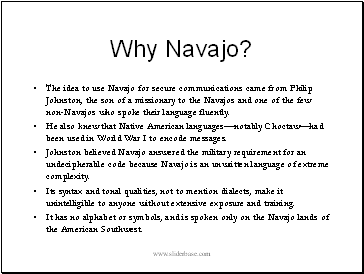 The idea to use Navajo for secure communications came from Philip Johnston, the son of a missionary to the Navajos and one of the few non-Navajos who spoke their language fluently.

He also knew that Native American languages—notably Choctaw—had been used in World War I to encode messages.

Johnston believed Navajo answered the military requirement for an undecipherable code because Navajo is an unwritten language of extreme complexity.

Its syntax and tonal qualities, not to mention dialects, make it unintelligible to anyone without extensive exposure and training.

It has no alphabet or symbols, and is spoken only on the Navajo lands of the American Southwest. 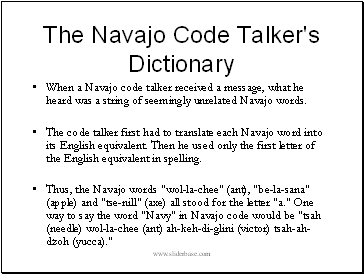 When a Navajo code talker received a message, what he heard was a string of seemingly unrelated Navajo words. 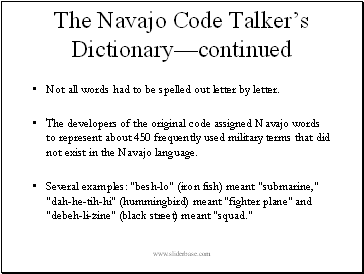 Not all words had to be spelled out letter by letter.

The developers of the original code assigned Navajo words to represent about 450 frequently used military terms that did not exist in the Navajo language. 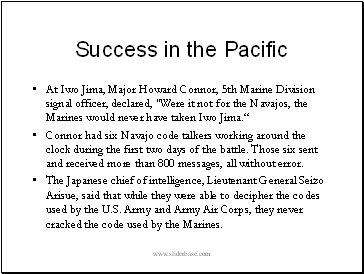 Success in the Pacific

At Iwo Jima, Major Howard Connor, 5th Marine Division signal officer, declared, "Were it not for the Navajos, the Marines would never have taken Iwo Jima.“

Connor had six Navajo code talkers working around the clock during the first two days of the battle. Those six sent and received more than 800 messages, all without error.

The Japanese chief of intelligence, Lieutenant General Seizo Arisue, said that while they were able to decipher the codes used by the U.S. Army and Army Air Corps, they never cracked the code used by the Marines. 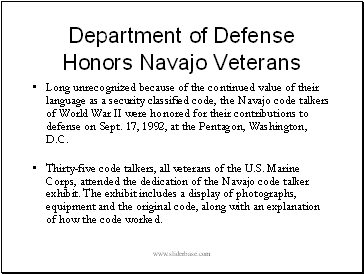