By using the appropriate chemical treatment one can separate the protein coats of TMV from the RNA.

Moreover, this process is reversible; by mixing the proteins and the RNA under appropriate conditions, “reconstitution” will occur.

They took two different strains of TMV, separated the RNAs from the protein coat.

Reconstituted “mixed” viruses by mixing the proteins of one strain with the RNA of the second strain, and vice versa.

When these mixed viruses were infected with tobacco leaves, the progeny was phenotypically and genotypically identical like parent from where RNA had been obtained. 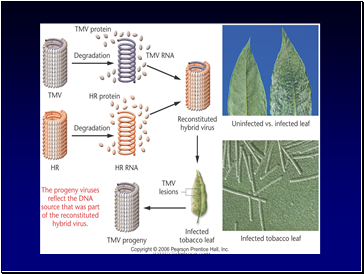 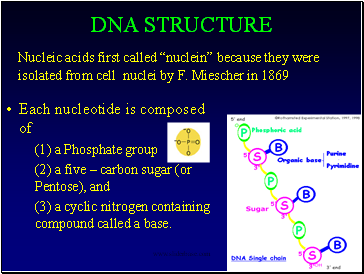 Each nucleotide is composed of

(3) a cyclic nitrogen containing compound called a base.

Nucleic acids first called “nuclein” because they were isolated from cell nuclei by F. Miescher in 1869 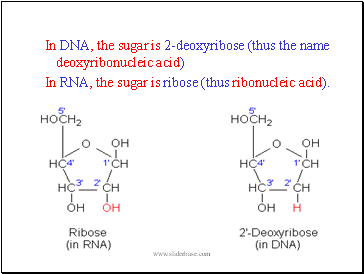 In DNA, the sugar is 2-deoxyribose (thus the name deoxyribonucleic acid)

In RNA, the sugar is ribose (thus ribonucleic acid). 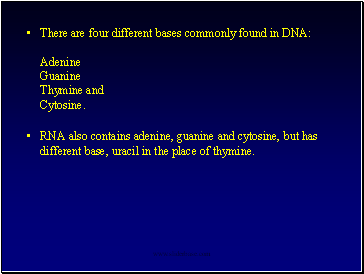 There are four different bases commonly found in DNA:

RNA also contains adenine, guanine and cytosine, but has different base, uracil in the place of thymine. 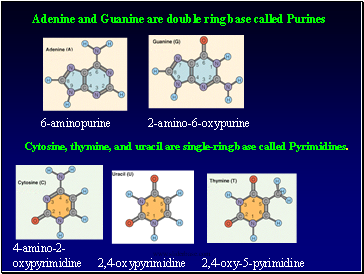 Cytosine, thymine, and uracil are single-ring base called Pyrimidines.

Adenine and Guanine are double ring base called Purines 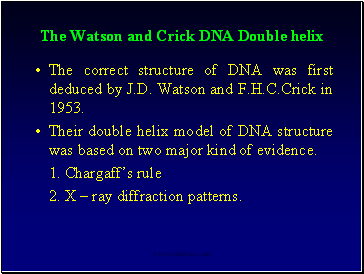 The correct structure of DNA was first deduced by J.D. Watson and F.H.C.Crick in 1953.

Their double helix model of DNA structure was based on two major kind of evidence. 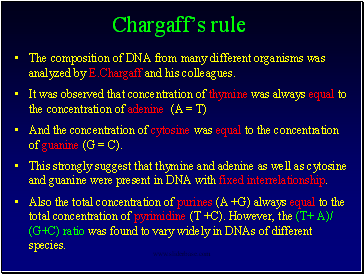 The composition of DNA from many different organisms was analyzed by E.Chargaff and his colleagues.

This strongly suggest that thymine and adenine as well as cytosine and guanine were present in DNA with fixed interrelationship.