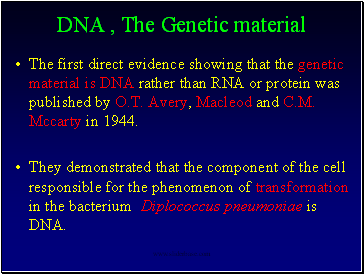 The first direct evidence showing that the genetic material is DNA rather than RNA or protein was published by O.T. Avery, Macleod and C.M. Mccarty in 1944.

They demonstrated that the component of the cell responsible for the phenomenon of transformation in the bacterium Diplococcus pneumoniae is DNA. 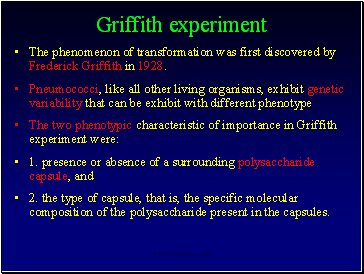 The phenomenon of transformation was first discovered by Frederick Griffith in 1928.

Pneumococci, like all other living organisms, exhibit genetic variability that can be exhibit with different phenotype

The two phenotypic characteristic of importance in Griffith experiment were:

1. presence or absence of a surrounding polysaccharide capsule, and

2. the type of capsule, that is, the specific molecular composition of the polysaccharide present in the capsules. 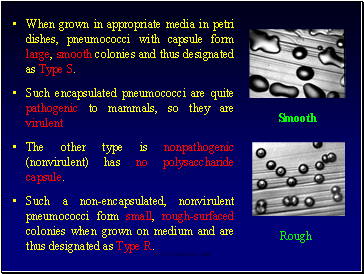 Such encapsulated pneumococci are quite pathogenic to mammals, so they are virulent

The other type is nonpathogenic (nonvirulent) has no polysaccharide capsule.

Such a non-encapsulated, nonvirulent pneumococci form small, rough-surfaced colonies when grown on medium and are thus designated as Type R. 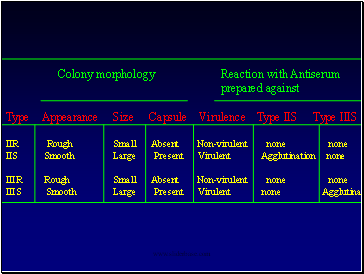 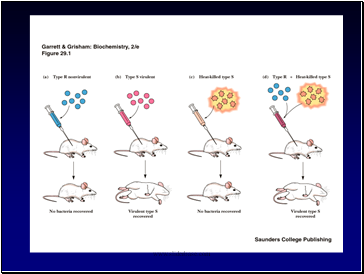 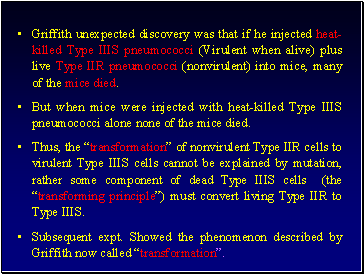 Griffith unexpected discovery was that if he injected heat-killed Type IIIS pneumococci (Virulent when alive) plus live Type IIR pneumococci (nonvirulent) into mice, many of the mice died.

But when mice were injected with heat-killed Type IIIS pneumococci alone none of the mice died. 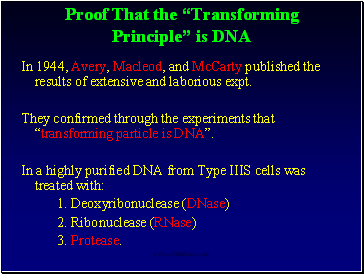