Since the genetic information is stored in DNA, the replication of DNA is central to all biology 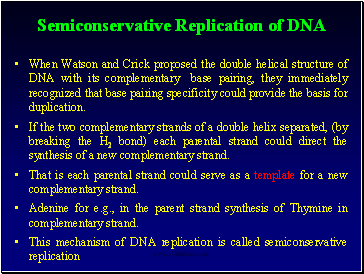 When Watson and Crick proposed the double helical structure of DNA with its complementary base pairing, they immediately recognized that base pairing specificity could provide the basis for duplication.

That is each parental strand could serve as a template for a new complementary strand.

Adenine for e.g., in the parent strand synthesis of Thymine in complementary strand.

This mechanism of DNA replication is called semiconservative replication 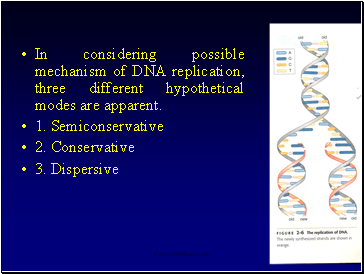 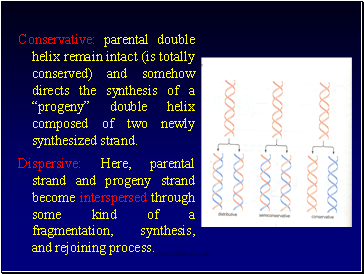 Dispersive: Here, parental strand and progeny strand become interspersed through some kind of a fragmentation, synthesis, and rejoining process. 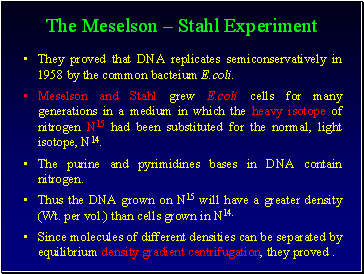 They proved that DNA replicates semiconservatively in 1958 by the common bacteium E.coli.

Meselson and Stahl grew E.coli cells for many generations in a medium in which the heavy isotope of nitrogen N15 had been substituted for the normal, light isotope, N14.

The purine and pyrimidines bases in DNA contain nitrogen.

Thus the DNA grown on N15 will have a greater density (Wt. per vol.) than cells grown in N14.

Since molecules of different densities can be separated by equilibrium density gradient centrifugation, they proved . 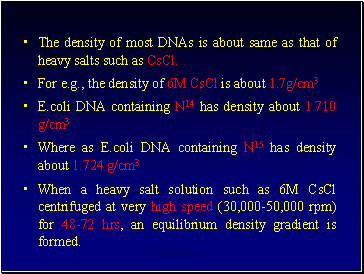 The density of most DNAs is about same as that of heavy salts such as CsCl. 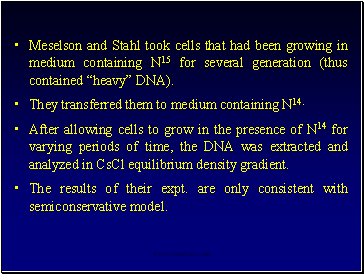 Meselson and Stahl took cells that had been growing in medium containing N15 for several generation (thus contained “heavy” DNA).