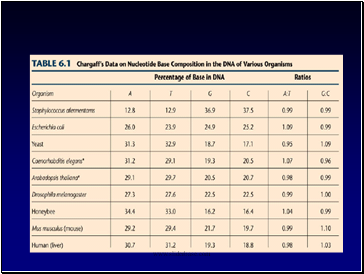 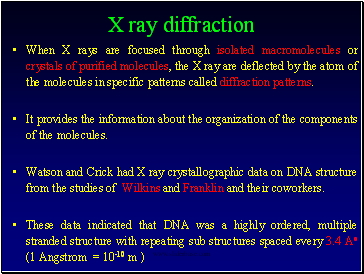 When X rays are focused through isolated macromolecules or crystals of purified molecules, the X ray are deflected by the atom of the molecules in specific patterns called diffraction patterns.

It provides the information about the organization of the components of the molecules.

Watson and Crick had X ray crystallographic data on DNA structure from the studies of Wilkins and Franklin and their coworkers. 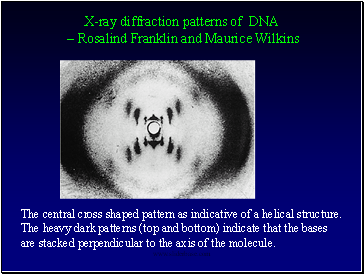 The central cross shaped pattern as indicative of a helical structure. The heavy dark patterns (top and bottom) indicate that the bases are stacked perpendicular to the axis of the molecule. 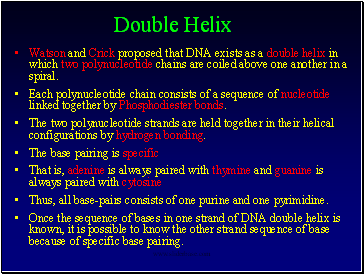 Watson and Crick proposed that DNA exists as a double helix in which two polynucleotide chains are coiled above one another in a spiral.

Each polynucleotide chain consists of a sequence of nucleotide linked together by Phosphodiester bonds.

The two polynucleotide strands are held together in their helical configurations by hydrogen bonding.

The base pairing is specific

Thus, all base-pairs consists of one purine and one pyrimidine. 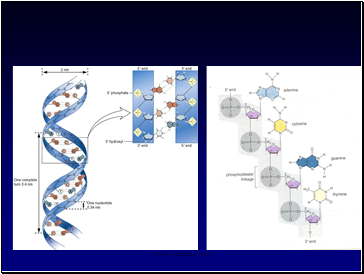 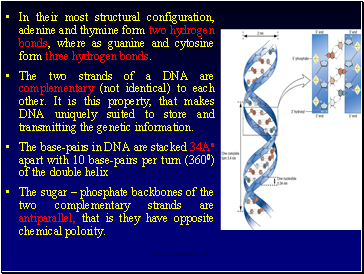 The two strands of a DNA are complementary (not identical) to each other. It is this property, that makes DNA uniquely suited to store and transmitting the genetic information.

The sugar – phosphate backbones of the two complementary strands are antiparallel, that is they have opposite chemical polority.