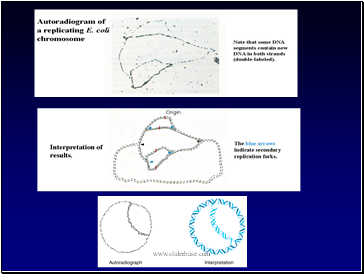 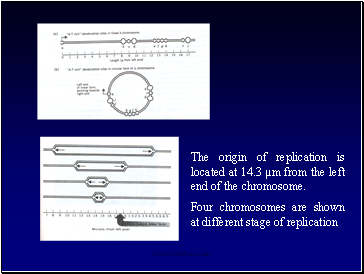 The origin of replication is located at 14.3 µm from the left end of the chromosome.

Four chromosomes are shown at different stage of replication 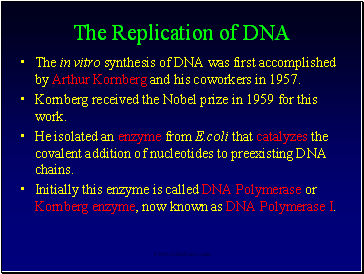 The Replication of DNA

The in vitro synthesis of DNA was first accomplished by Arthur Kornberg and his coworkers in 1957.

Kornberg received the Nobel prize in 1959 for this work.

He isolated an enzyme from E.coli that catalyzes the covalent addition of nucleotides to preexisting DNA chains. 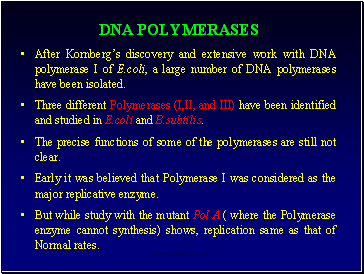 After Kornberg’s discovery and extensive work with DNA polymerase I of E.coli, a large number of DNA polymerases have been isolated.

Three different Polymerases (I,II, and III) have been identified and studied in E.coli and B.subtilis.

The precise functions of some of the polymerases are still not clear.

Early it was believed that Polymerase I was considered as the major replicative enzyme.

But while study with the mutant Pol A ( where the Polymerase enzyme cannot synthesis) shows, replication same as that of Normal rates. 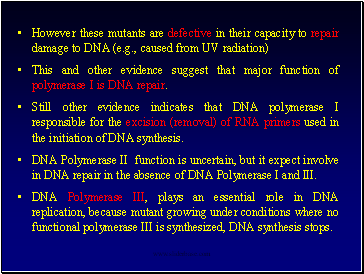 However these mutants are defective in their capacity to repair damage to DNA (e.g., caused from UV radiation)

This and other evidence suggest that major function of polymerase I is DNA repair.

Still other evidence indicates that DNA polymerase I responsible for the excision (removal) of RNA primers used in the initiation of DNA synthesis. 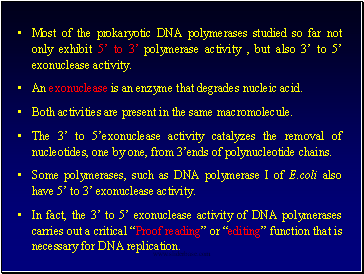 Most of the prokaryotic DNA polymerases studied so far not only exhibit 5’ to 3’ polymerase activity , but also 3’ to 5’ exonuclease activity.

An exonuclease is an enzyme that degrades nucleic acid.

Both activities are present in the same macromolecule.

The 3’ to 5’exonuclease activity catalyzes the removal of nucleotides, one by one, from 3’ends of polynucleotide chains.

Some polymerases, such as DNA polymerase I of E.coli also have 5’ to 3’ exonuclease activity.

In fact, the 3’ to 5’ exonuclease activity of DNA polymerases carries out a critical “Proof reading” or “editing” function that is necessary for DNA replication.