Science moves with the spirit of an adventure characterized both by youthful arrogance and by the belief that the truth, once found, would be simple as well as pretty. 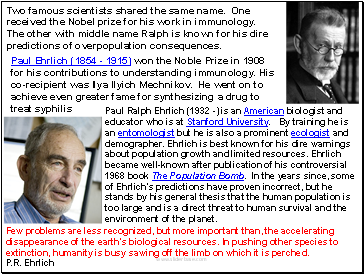 (1854 - 1915) won the Noble Prize in 1908 for his contributions to understanding immunology. His co-recipient was Ilya Ilyich Mechnikov. He went on to achieve even greater fame for synthesizing a drug to treat syphilis

Two famous scientists shared the same name. One received the Nobel prize for his work in immunology. The other with middle name Ralph is known for his dire predictions of overpopulation consequences.

Paul Ralph Ehrlich (1932 -) is an American biologist and educator who is at Stanford University. By training he is an entomologist but he is also a prominent ecologist and demographer. Ehrlich is best known for his dire warnings about population growth and limited resources. Ehrlich became well-known after publication of his controversial 1968 book The Population Bomb. In the years since, some of Ehrlich's predictions have proven incorrect, but he stands by his general thesis that the human population is too large and is a direct threat to human survival and the environment of the planet.

Few problems are less recognized, but more important than, the accelerating disappearance of the earth's biological resources. In pushing other species to extinction, humanity is busy sawing off the limb on which it is perched. 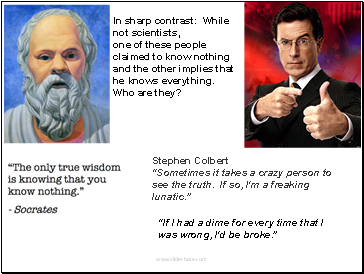 “Sometimes it takes a crazy person to see the truth. If so, I'm a freaking lunatic.”

“If I had a dime for every time that I was wrong, I'd be broke.”

In sharp contrast: While not scientists,

one of these people claimed to know nothing and the other implies that he knows everything. Who are they? 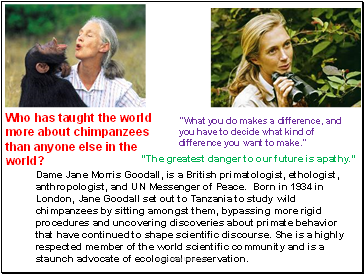 Dame Jane Morris Goodall, is a British primatologist, ethologist, anthropologist, and UN Messenger of Peace. Born in 1934 in London, Jane Goodall set out to Tanzania to study wild chimpanzees by sitting amongst them, bypassing more rigid procedures and uncovering discoveries about primate behavior that have continued to shape scientific discourse. She is a highly respected member of the world scientific community and is a staunch advocate of ecological preservation.

Who has taught the world more about chimpanzees than anyone else in the world?

“What you do makes a difference, and you have to decide what kind of difference you want to make.”

“The greatest danger to our future is apathy.” 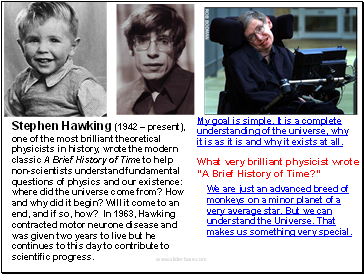