What 18th century French chemist was considered the father of modern chemistry but lost his life in the French revolution? 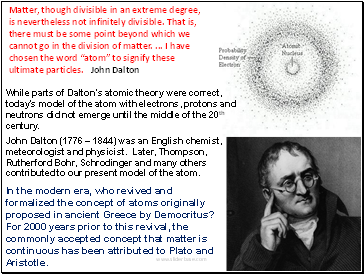 Matter, though divisible in an extreme degree, is nevertheless not infinitely divisible. That is, there must be some point beyond which we cannot go in the division of matter. . I have chosen the word “atom” to signify these ultimate particles. John Dalton

In the modern era, who revived and formalized the concept of atoms originally proposed in ancient Greece by Democritus? For 2000 years prior to this revival, the commonly accepted concept that matter is continuous has been attributed to Plato and Aristotle.

While parts of Dalton’s atomic theory were correct, today’s model of the atom with electrons, protons and neutrons did not emerge until the middle of the 20th century.

John Dalton (1776 – 1844) was an English chemist, meteorologist and physicist. Later, Thompson, Rutherford Bohr, Schrodinger and many others contributed to our present model of the atom. 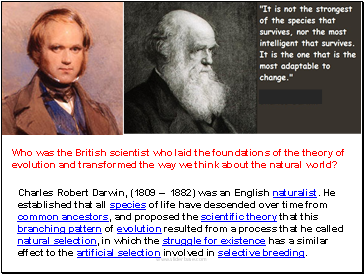 , (1809 – 1882) was an English naturalist. He established that all species of life have descended over time from common ancestors, and proposed the scientific theory that this branching pattern of evolution resulted from a process that he called natural selection, in which the struggle for existence has a similar effect to the artificial selection involved in selective breeding.

Who was the British scientist who laid the foundations of the theory of evolution and transformed the way we think about the natural world? 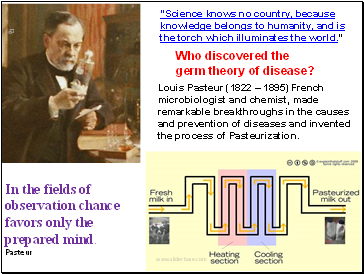 “Science knows no country, because knowledge belongs to humanity, and is the torch which illuminates the world.”

In the fields of observation chance favors only the prepared mind.

Louis Pasteur (1822 – 1895) French microbiologist and chemist, made remarkable breakthroughs in the causes and prevention of diseases and invented the process of Pasteurization.

Who discovered the germ theory of disease? 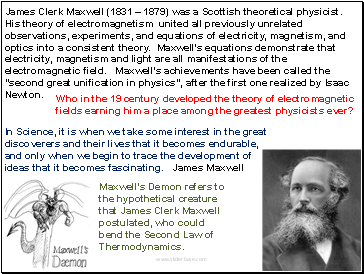 (1831 – 1879) was a Scottish theoretical physicist. His theory of electromagnetism united all previously unrelated observations, experiments, and equations of electricity, magnetism, and optics into a consistent theory. Maxwell's equations demonstrate that electricity, magnetism and light are all manifestations of the electromagnetic field. Maxwell's achievements have been called the "second great unification in physics", after the first one realized by Isaac Newton.

Who in the 19 century developed the theory of electromagnetic fields earning him a place among the greatest physicists ever?