(1942 – present), one of the most brilliant theoretical physicists in history, wrote the modern classic A Brief History of Time to help non-scientists understand fundamental questions of physics and our existence: where did the universe come from? How and why did it begin? Will it come to an end, and if so, how? In 1963, Hawking contracted motor neurone disease and was given two years to live but he continues to this day to contribute to scientific progress.

My goal is simple. It is a complete understanding of the universe, why it is as it is and why it exists at all.

We are just an advanced breed of monkeys on a minor planet of a very average star. But we can understand the Universe. That makes us something very special.

“A Brief History of Time?” 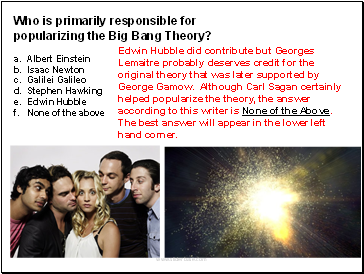 Who is primarily responsible for

None of the above

Edwin Hubble did contribute but Georges Lemaitre probably deserves credit for the original theory that was later supported by George Gamow. Although Carl Sagan certainly helped popularize the theory, the answer according to this writer is None of the Above. The best answer will appear in the lower left hand corner. 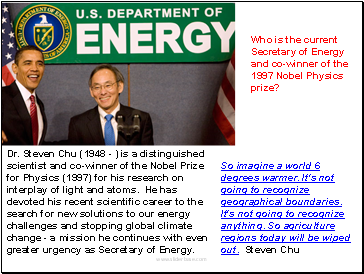 (1948 - ) is a distinguished scientist and co-winner of the Nobel Prize for Physics (1997) for his research on interplay of light and atoms. He has devoted his recent scientific career to the search for new solutions to our energy challenges and stopping global climate change - a mission he continues with even greater urgency as Secretary of Energy.

Who is the current Secretary of Energy and co-winner of the 1997 Nobel Physics prize? 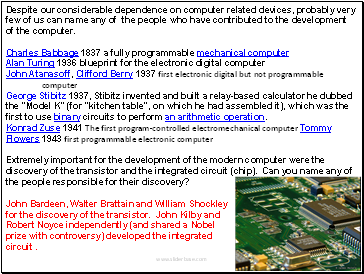 Despite our considerable dependence on computer related devices, probably very few of us can name any of the people who have contributed to the development of the computer.

George Stibitz 1937, Stibitz invented and built a relay-based calculator he dubbed the "Model K" (for "kitchen table", on which he had assembled it), which was the first to use binary circuits to perform an arithetic operation.