Anyone who has never made a mistake has never tried anything new.

The most beautiful thing we can experience is the mysterious. It is the source of all true art and all science. 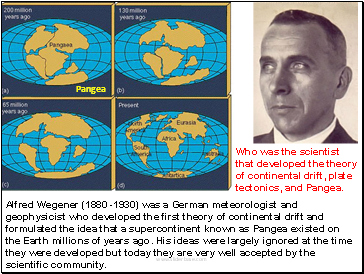 Who was the scientist that developed the theory of continental drift, plate tectonics, and Pangea.

Alfred Wegener (1880 -1930) was a German meteorologist and geophysicist who developed the first theory of continental drift and formulated the idea that a supercontinent known as Pangea existed on the Earth millions of years ago. His ideas were largely ignored at the time they were developed but today they are very well accepted by the scientific community. 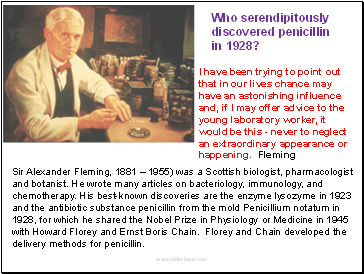 I have been trying to point out that in our lives chance may have an astonishing influence and, if I may offer advice to the young laboratory worker, it would be this - never to neglect an extraordinary appearance or happening. Fleming

Who serendipitously discovered penicillin in 1928?

Sir Alexander Fleming, 1881 – 1955) was a Scottish biologist, pharmacologist and botanist. He wrote many articles on bacteriology, immunology, and chemotherapy. His best-known discoveries are the enzyme lysozyme in 1923 and the antibiotic substance penicillin from the mold Penicillium notatum in 1928, for which he shared the Nobel Prize in Physiology or Medicine in 1945 with Howard Florey and Ernst Boris Chain. Florey and Chain developed the delivery methods for penicillin. 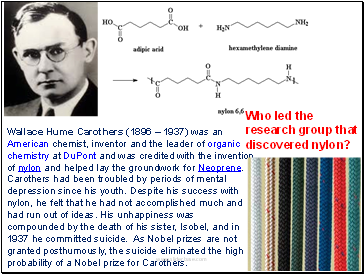 (1896 – 1937) was an American chemist, inventor and the leader of organic chemistry at DuPont and was credited with the invention of nylon and helped lay the groundwork for Neoprene. Carothers had been troubled by periods of mental depression since his youth. Despite his success with nylon, he felt that he had not accomplished much and had run out of ideas. His unhappiness was compounded by the death of his sister, Isobel, and in 1937 he committed suicide. As Nobel prizes are not granted posthumously, the suicide eliminated the high probability of a Nobel prize for Carothers.

Who led the research group that discovered nylon? 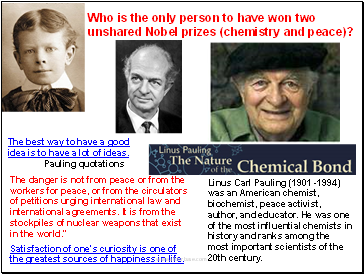 (1901 -1994) was an American chemist, biochemist, peace activist, author, and educator. He was one of the most influential chemists in history and ranks among the most important scientists of the 20th century.

Who is the only person to have won two

The best way to have a good idea is to have a lot of ideas. Pauling quotations

Satisfaction of one's curiosity is one of the greatest sources of happiness in life.