The danger is not from peace or from the workers for peace, or from the circulators of petitions urging international law and international agreements. It is from the stockpiles of nuclear weapons that exist in the world." 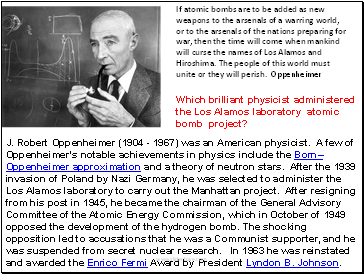 (1904 - 1967) was an American physicist. A few of Oppenheimer's notable achievements in physics include the Born–Oppenheimer approximation and a theory of neutron stars. After the 1939 invasion of Poland by Nazi Germany, he was selected to administer the Los Alamos laboratory to carry out the Manhattan project. After resigning from his post in 1945, he became the chairman of the General Advisory Committee of the Atomic Energy Commission, which in October of 1949 opposed the development of the hydrogen bomb. The shocking opposition led to accusations that he was a Communist supporter, and he was suspended from secret nuclear research. In 1963 he was reinstated and awarded the Enrico Fermi Award by President Lyndon B. Johnson.

If atomic bombs are to be added as new weapons to the arsenals of a warring world, or to the arsenals of the nations preparing for war, then the time will come when mankind will curse the names of Los Alamos and Hiroshima. The people of this world must unite or they will perish. Oppenheimer 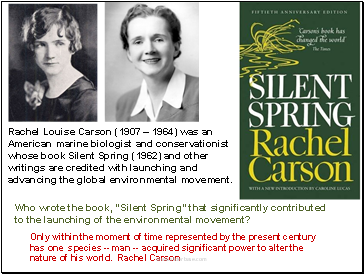 (1907 – 1964) was an American marine biologist and conservationist whose book Silent Spring (1962) and other writings are credited with launching and advancing the global environmental movement.

Only within the moment of time represented by the present century has one species -- man -- acquired significant power to alter the nature of his world. Rachel Carson

Who wrote the book, “Silent Spring” that significantly contributed to the launching of the environmental movement? 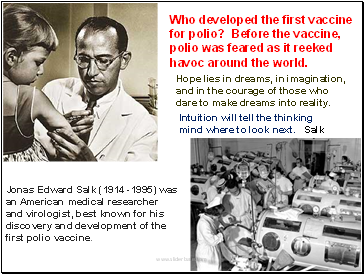 (1914 -1995) was an American medical researcher and virologist, best known for his discovery and development of the first polio vaccine.

Who developed the first vaccine for polio? Before the vaccine, polio was feared as it reeked havoc around the world.

Hope lies in dreams, in imagination, and in the courage of those who dare to make dreams into reality.

Intuition will tell the thinking mind where to look next. Salk 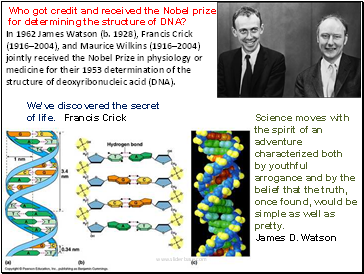 Who got credit and received the Nobel prize for determining the structure of DNA?