Maxwell's Demon refers to the hypothetical creature that James Clerk Maxwell postulated, who could bend the Second Law of Thermodynamics.

In Science, it is when we take some interest in the great discoverers and their lives that it becomes endurable, and only when we begin to trace the development of ideas that it becomes fascinating. James Maxwell 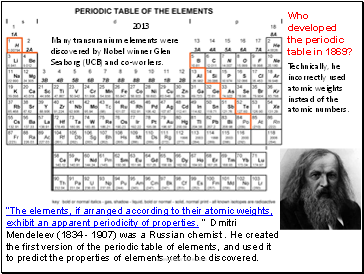 Who developed the periodic table in 1869?

“The elements, if arranged according to their atomic weights, exhibit an apparent periodicity of properties. “ Dmitri Mendeleev (1834 - 1907) was a Russian chemist . He created the first version of the periodic table of elements, and used it to predict the properties of elements yet to be discovered.

Technically, he incorrectly used atomic weights instead of the atomic numbers.

Many transuranium elements were discovered by Nobel winner Glen Seaborg (UCB) and co-workers. 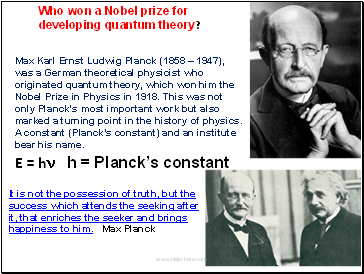 Max Karl Ernst Ludwig Planck (1858 – 1947), was a German theoretical physicist who originated quantum theory, which won him the Nobel Prize in Physics in 1918. This was not only Planck's most important work but also marked a turning point in the history of physics. A constant (Planck’s constant) and an institute bear his name.

Who won a Nobel prize for developing quantum theory?

It is not the possession of truth, but the success which attends the seeking after it, that enriches the seeker and brings happiness to him. Max Planck 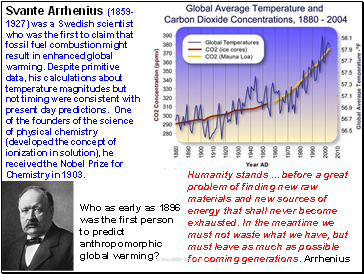 Humanity stands . before a great problem of finding new raw materials and new sources of energy that shall never become exhausted. In the meantime we must not waste what we have, but must leave as much as possible for coming generations. Arrhenius

Svante Arrhenius (1859-1927) was a Swedish scientist who was the first to claim that fossil fuel combustion might result in enhanced global warming. Despite primitive data, his calculations about temperature magnitudes but not timing were consistent with present day predictions. One of the founders of the science of physical chemistry (developed the concept of ionization in solution), he received the Nobel Prize for Chemistry in 1903.

Who as early as 1896 was the first person 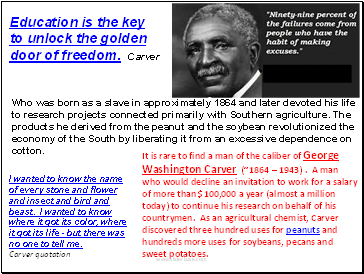 It is rare to find a man of the caliber of George Washington Carver (~1864 – 1943) . A man who would decline an invitation to work for a salary of more than $100,000 a year (almost a million today) to continue his research on behalf of his countrymen. As an agricultural chemist, Carver discovered three hundred uses for peanuts and hundreds more uses for soybeans, pecans and sweet potatoes.