Education is the key to unlock the golden door of freedom. Carver

Who was born as a slave in approximately 1864 and later devoted his life to research projects connected primarily with Southern agriculture. The products he derived from the peanut and the soybean revolutionized the economy of the South by liberating it from an excessive dependence on cotton. 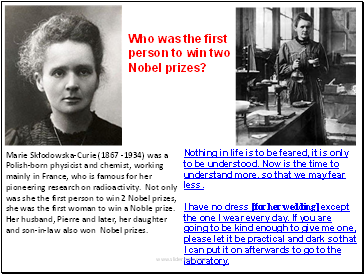 Marie Skłodowska-Curie (1867 -1934) was a Polish-born physicist and chemist, working mainly in France, who is famous for her pioneering research on radioactivity. Not only was she the first person to win 2 Nobel prizes, she was the first woman to win a Noble prize. Her husband, Pierre and later, her daughter and son-in-law also won Nobel prizes.

Who was the first

Nothing in life is to be feared, it is only to be understood. Now is the time to understand more, so that we may fear less.

I have no dress [for her wedding] except the one I wear every day. If you are going to be kind enough to give me one, please let it be practical and dark so that I can put it on afterwards to go to the laboratory. 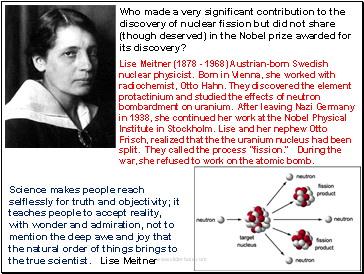 (1878 - 1968) Austrian-born Swedish nuclear physicist. Born in Vienna, she worked with radiochemist, Otto Hahn. They discovered the element protactinium and studied the effects of neutron bombardment on uranium. After leaving Nazi Germany in 1938, she continued her work at the Nobel Physical Institute in Stockholm. Lise and her nephew Otto Frisch, realized that the the uranium nucleus had been split. They called the process "fission." During the war, she refused to work on the atomic bomb.

Who made a very significant contribution to the discovery of nuclear fission but did not share (though deserved) in the Nobel prize awarded for its discovery?

Science makes people reach selflessly for truth and objectivity; it teaches people to accept reality, with wonder and admiration, not to mention the deep awe and joy that the natural order of things brings to the true scientist. Lise Meitner 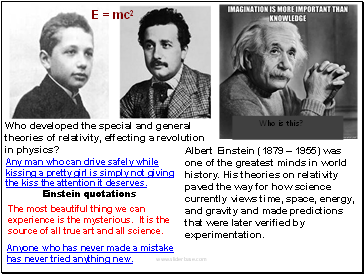 Who developed the special and general theories of relativity, effecting a revolution in physics?

Albert Einstein (1879 – 1955) was one of the greatest minds in world history. His theories on relativity paved the way for how science currently views time, space, energy, and gravity and made predictions that were later verified by experimentation.

Any man who can drive safely while kissing a pretty girl is simply not giving the kiss the attention it deserves. Einstein quotations