Conservatives vs. Liberals- Redistribution of Wealth 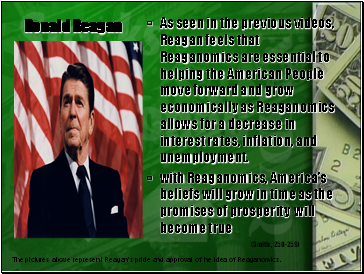 As seen in the previous videos, Reagan feels that Reaganomics are essential to helping the American People move forward and grow economically as Reaganomics allows for a decrease in interest rates, inflation, and unemployment.

with Reaganomics, America’s beliefs will grow in time as the promises of prosperity will become true

The pictures above represent Reagan’s pride and approval of the idea of Reaganomics. 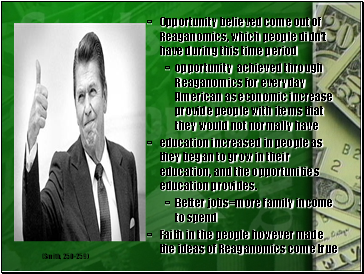 Opportunity believed come out of Reaganomics, which people didn’t have during this time period

education increased in people as they began to grow in their education, and the opportunities education provides. 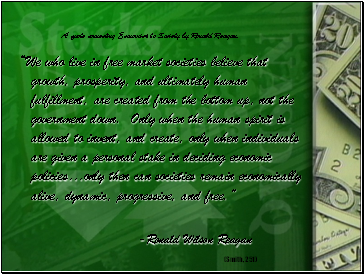 “We who live in free market societies believe that growth, prosperity, and ultimately human fulfillment, are created from the bottom up, not the government down. Only when the human spirit is allowed to invent, and create, only when individuals are given a personal stake in deciding economic policies…only then can societies remain economically alive, dynamic, progressive, and free.”

A quote connecting Economics to Society by Ronald Reagan. 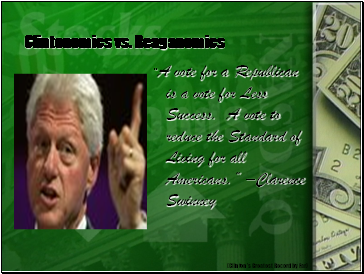 “A vote for a Republican is a vote for Less Success. A vote to reduce the Standard of Living for all Americans.” –Clarence Swinney 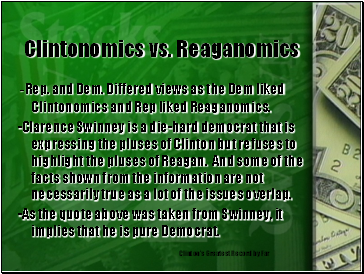 -Clarence Swinney is a die-hard democrat that is expressing the pluses of Clinton but refuses to highlight the pluses of Reagan. And some of the facts shown from the information are not necessarily true as a lot of the issues overlap.

-As the quote above was taken from Swinney, it implies that he is pure Democrat. 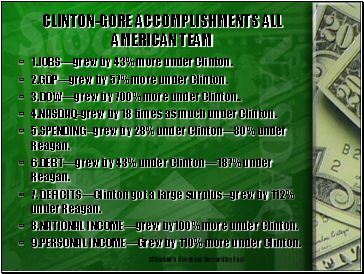