-The author of this piece explains how Reaganomics is a form of REDISTRIBUTING THE WEALTH, as is Obama’s economic plan.

-Reaganomics, however, differs from Obamaanomics, where the author claims that Obama is helping the middle class and lower class.

-He then goes to state how Reagan is helping the rich get richer by spreading the wealth to the businesses and the wealthier peoples. 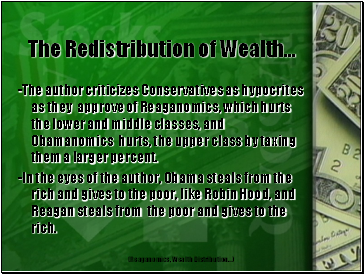 The Redistribution of Wealth…

-The author criticizes Conservatives as hypocrites as they approve of Reaganomics, which hurts the lower and middle classes, and Obamanomics hurts, the upper class by taxing them a larger percent. 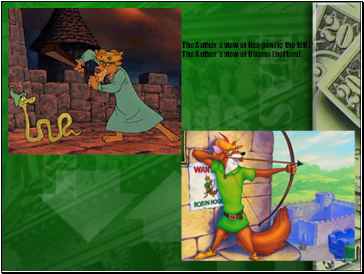 The Author’s view of Reagan (to the left).

The Author’s view of Obama (bottom). 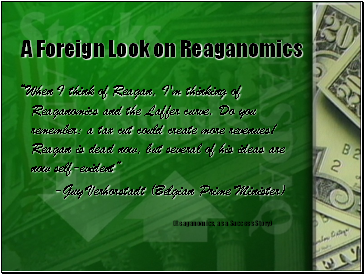 A Foreign Look on Reaganomics

“When I think of Reagan, I'm thinking of Reaganomics and the Laffer curve. Do you remember: a tax cut could create more revenues! Reagan is dead now, but several of his ideas are now self-evident”

(Reaganomics, as a Success Story) 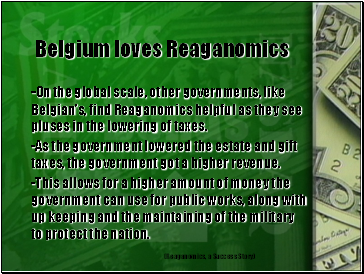 -On the global scale, other governments, like Belgian’s, find Reaganomics helpful as they see pluses in the lowering of taxes.

-This allows for a higher amount of money the government can use for public works, along with up keeping and the maintaining of the military to protect the nation. 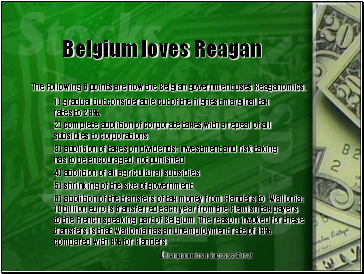 The Following 6 points are how the Belgian government uses Reaganomics.

1) gradual but considerable cut of the highest marginal tax rates to 28%.

2) complete abolition of corporate taxes,with a repeal of all subsidies to corporations

3) abolition of taxes on dividends: Investment and risk taking has to be encouraged, not punished

4) abolition of all agricultural subsidies

5) shrinking of the size of government

6) abolition of the transfers of tax money from Flanders to Wallonia: 10 billion euro is transferred each year from the Flemish tax payers to the French speaking part of Belgium. The reason invoked for these transfers is that Wallonia has an unemployment rate of 18% compared with 8% for Flanders