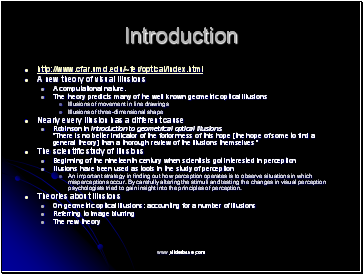 A new theory of visual illusions

The theory predicts many of the well known geometric optical illusions

Illusions of movement in line drawings

Nearly every illusion has a different cause

The scientific study of illusions

Beginning of the nineteenth century when scientists got interested in perception

Illusions have been used as tools in the study of perception

An important strategy in finding out how perception operates is to observe situations in which misperceptions occur. By carefully altering the stimuli and testing the changes in visual perception psychologists tried to gain insight into the principles of perception.

On geometric optical illusions: accounting for a number of illusions 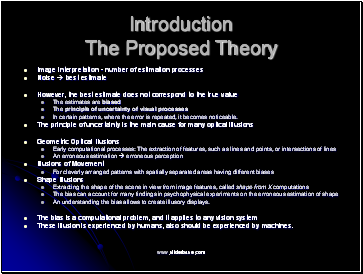 However, the best estimate does not correspond to the true value

The estimates are biased

The principle of uncertainty of visual processes

In certain patterns, where the error is repeated, it becomes noticeable.

Early computational processes: The extraction of features, such as lines and points, or intersections of lines

Extracting the shape of the scene in view from image features, called shape from X computations

An understanding the bias allows to create illusory displays.

The bias is a computational problem, and it applies to any vision system 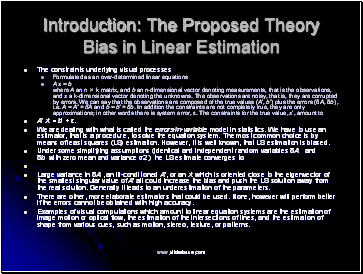 Formulated as an over-determined linear equations

A x = b where A an n × k matrix, and b an n-dimensional vector denoting measurements, that is the observations, and x a k-dimensional vector denoting the unknowns. The observations are noisy, that is, they are corrupted by errors. We can say that the observations are composed of the true values (A', b') plus the errors (δA, δb) , i.e. A = A' + δA and b = b' + δb. In addition the constraints are not completely true, they are only approximations; in other words there is system error, ε. The constraints for the true value, x', amount to