Natural disasters reduce the quality of life for the people affected and they reduce the amount of money the government has to spend on development projects.

Countries without many raw materials like coal, oil or metal ores tend to make less money because they have fewer products to sell.

This means they have less money to spend on development.

Some countries do have a lot of raw materials but still aren't very developed because they don’t have the money to develop the infrastructure to exploit them. 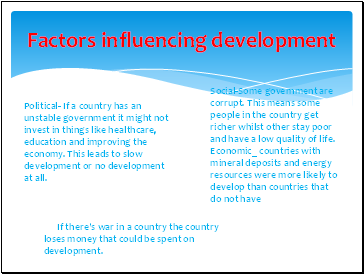 If there's war in a country the country loses money that could be spent on development.

Political- If a country has an unstable government it might not invest in things like healthcare, education and improving the economy. This leads to slow development or no development at all.

Social-Some government are corrupt. This means some people in the country get richer whilst other stay poor and have a low quality of life. 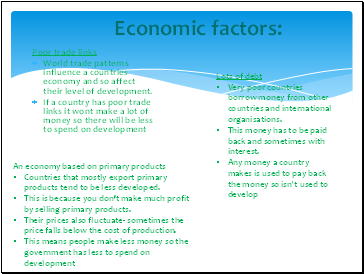 World trade patterns influence a countries economy and so affect their level of development.

This money has to be paid back and sometimes with interest.

An economy based on primary products

This is because you don’t make much profit by selling primary products.

Their prices also fluctuate- sometimes the price falls below the cost of production. 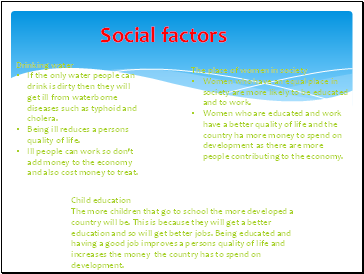 If the only water people can drink is dirty then they will get ill from waterborne diseases such as typhoid and cholera.

Being ill reduces a persons quality of life.

Ill people can work so don’t add money to the economy and also cost money to treat.

The place of women in society

Women who have an equal place in society are more likely to be educated and to work.

Women who are educated and work have a better quality of life and the country ha more money to spend on development as there are more people contributing to the economy.

The more children that go to school the more developed a country will be. This is because they will get a better education and so will get better jobs. Being educated and having a good job improves a persons quality of life and increases the money the country has to spend on development.