The hurricane destroyed 70% of the countries crops.

Around 70-80% of the transport infrastructure was severely damaged.

20% of schools were damaged as well as 117 health centres and six hospitals. 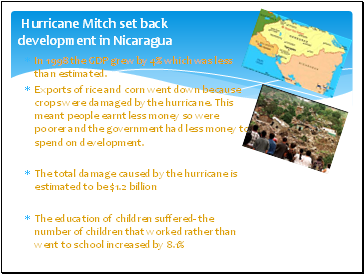 Exports of rice and corn went down because crops were damaged by the hurricane. This meant people earnt less money so were poorer and the government had less money to spend on development.

The total damage caused by the hurricane is estimated to be $1.2 billion

The education of children suffered- the number of children that worked rather than went to school increased by 8.1% 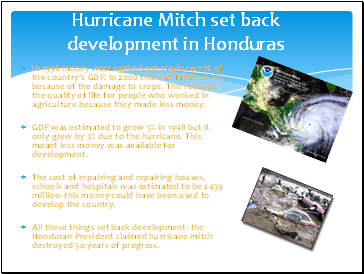 In 1998 money from agriculture made up 27% of the country's GDP. In 2000 this had fallen to 18% because of the damage to crops. This reduced the quality of life for people who worked in agriculture because they made less money.

GDP was estimated to grow 5% in 1998 but it only grew by 3% due to the hurricane. This meant less money was available for development.

The cost of repairing and repairing houses, schools and hospitals was estimated to be $439 million- this money could have been used to develop the country. 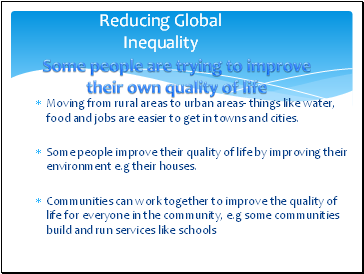 Moving from rural areas to urban areas- things like water, food and jobs are easier to get in towns and cities.

Some people improve their quality of life by improving their environment e.g their houses.

Communities can work together to improve the quality of life for everyone in the community, e.g some communities build and run services like schools

Some people are trying to improve their own quality of life 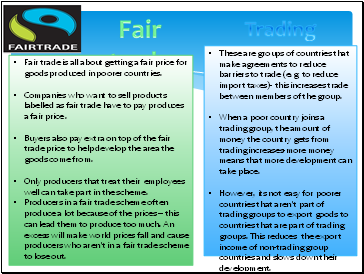 Fair trade is all about getting a fair price for goods produced in poorer countries.

Companies who want to sell products labelled as fair trade have to pay produces a fair price .

Buyers also pay extra on top of the fair trade price to help develop the area the goods come from.

Only producers that treat their employees well can take part in the scheme.