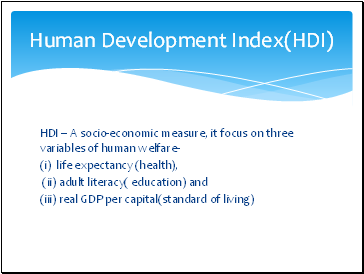 HDI – A socio-economic measure, it focus on three variables of human welfare- 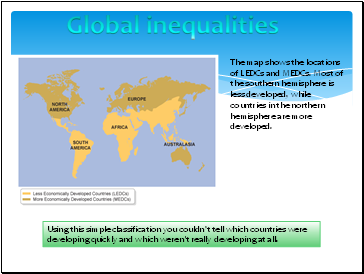 Using this simple classification you couldn’t tell which countries were developing quickly and which weren't really developing at all. 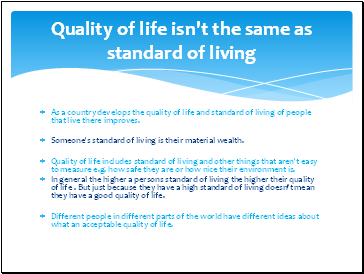 Quality of life isn't the same as standard of living

As a country develops the quality of life and standard of living of people that live there improves.

Someone's standard of living is their material wealth.

Quality of life includes standard of living and other things that aren't easy to measure e.g. how safe they are or how nice their environment is.

Different people in different parts of the world have different ideas about what an acceptable quality of life. 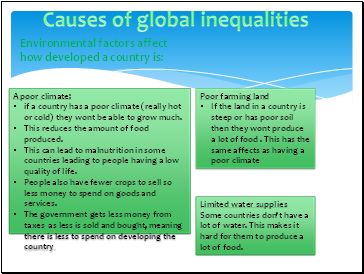 Environmental factors affect how developed a country is:

if a country has a poor climate (really hot or cold) they wont be able to grow much.

This reduces the amount of food produced.

This can lead to malnutrition in some countries leading to people having a low quality of life.

People also have fewer crops to sell so less money to spend on goods and services.

The government gets less money from taxes as less is sold and bought, meaning there is less to spend on developing the country.

If the land in a country is steep or has poor soil then they wont produce a lot of food . This has the same affects as having a poor climate

Some countries don’t have a lot of water. This makes it hard for them to produce a lot of food. 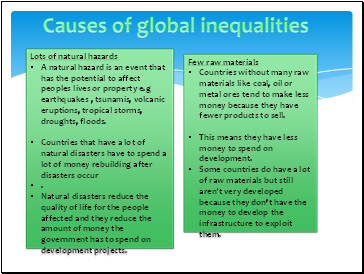 A natural hazard is an event that has the potential to affect peoples lives or property e.g earthquakes , tsunamis, volcanic eruptions, tropical storms, droughts, floods.