Human development measures the access the population has to wealth, jobs, education, nutrition, health, leisure and safety - as well as political and cultural freedom. Material elements, such as wealth and nutrition, are described as the standard of living. Health and leisure are often referred to as quality of life. 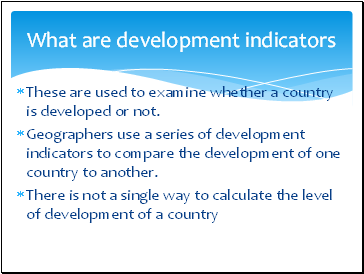 What are development indicators

These are used to examine whether a country is developed or not.

Geographers use a series of development indicators to compare the development of one country to another. 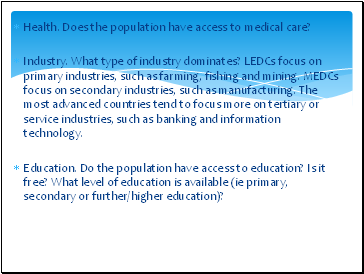 Health. Does the population have access to medical care?

Education. Do the population have access to education? Is it free? What level of education is available (ie primary, secondary or further/higher education)? 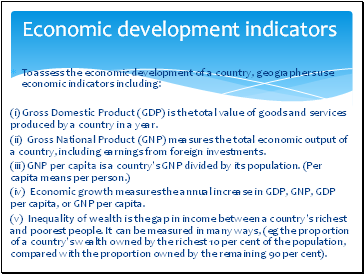 To assess the economic development of a country, geographers use economic indicators including:

(i) Gross Domestic Product (GDP) is the total value of goods and services produced by a country in a year.

(iii) GNP per capita is a country's GNP divided by its population. (Per capita means per person.) 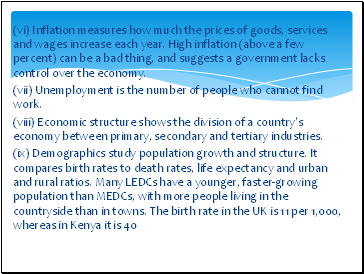 (vi) Inflation measures how much the prices of goods, services and wages increase each year. High inflation (above a few percent) can be a bad thing, and suggests a government lacks control over the economy.

(vii) Unemployment is the number of people who cannot find work.

(viii) Economic structure shows the division of a country's economy between primary, secondary and tertiary industries.

(ix) Demographics study population growth and structure. It compares birth rates to death rates, life expectancy and urban and rural ratios. Many LEDCs have a younger, faster-growing population than MEDCs, with more people living in the countryside than in towns. The birth rate in the UK is 11 per 1,000, whereas in Kenya it is 40