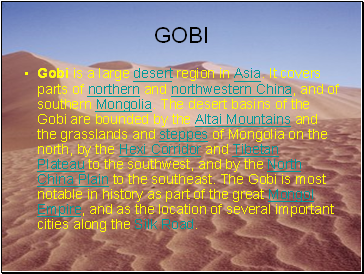 Gobi is a large desert region in Asia. It covers parts of northern and northwestern China, and of southern Mongolia. The desert basins of the Gobi are bounded by the Altai Mountains and the grasslands and steppes of Mongolia on the north, by the Hexi Corridor and Tibetan Plateau to the southwest, and by the North China Plain to the southeast. The Gobi is most notable in history as part of the great Mongol Empire, and as the location of several important cities along the Silk Road. 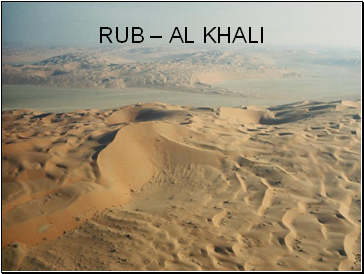 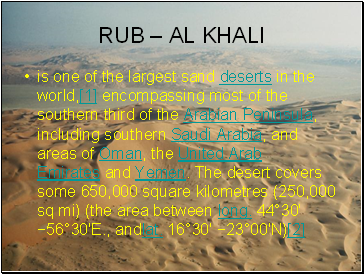 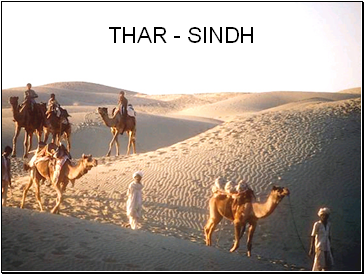 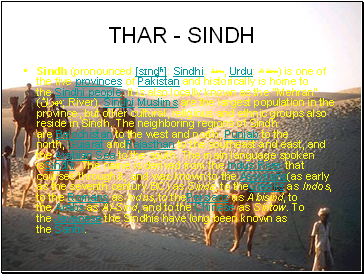 Sindh (pronounced [sɪnd̪ʱ]: Sindhi: سنڌ, Urdu: سندھ) is one of the five provinces of Pakistan and historically is home to the Sindhi people. It is also locally known as the "Mehran" (مهراڻ; River). Sindhi Muslims are the largest population in the province, but other cultural, religious and ethnic groups also reside in Sindh. The neighboring regions of Sindh are Balochistan to the west and north, Punjab to the north, Gujarat andRajasthan to the southeast and east, and the Arabian Sea to the south. The main language spoken isSindhi. The name is derived from the Indus River that courses through it, and was known to the Assyrians(as early as the seventh century BC) as Sinda, to theGreeks as Indos, to the Romans as Indus, to thePersians as Abisind, to the Arabs as Al-Sind, and to the Chinese as Sintow. To the Javanese the Sindhis have long been known as the Santri. 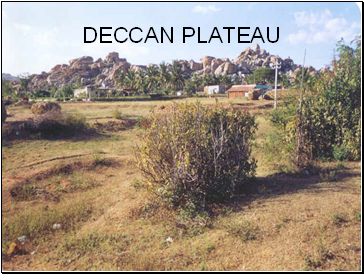 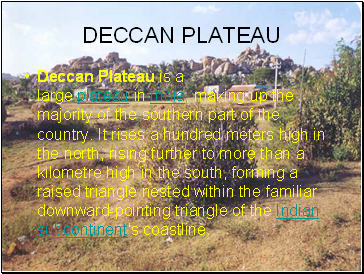 Deccan Plateau is a large plateau in India, making up the majority of the southern part of the country. It rises a hundred meters high in the north, rising further to more than a kilometre high in the south, forming a raised triangle nested within the familiar downward-pointing triangle of the Indian subcontinent's coastline.