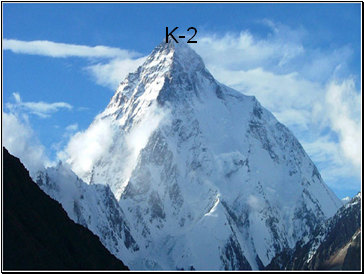 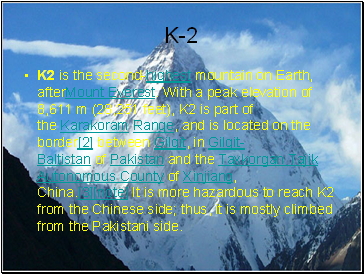 K2 is the second-highest mountain on Earth, afterMount Everest. With a peak elevation of 8,611 m (28,251 feet), K2 is part of the Karakoram Range, and is located on the border[2] between Gilgit, in Gilgit-Baltistan of Pakistan and the Taxkorgan Tajik Autonomous County of Xinjiang, China.[3][note] It is more hazardous to reach K2 from the Chinese side; thus, it is mostly climbed from the Pakistani side. 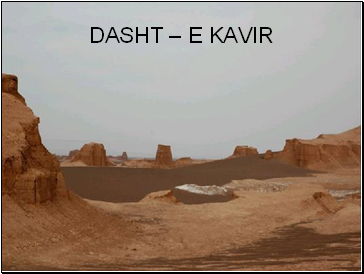 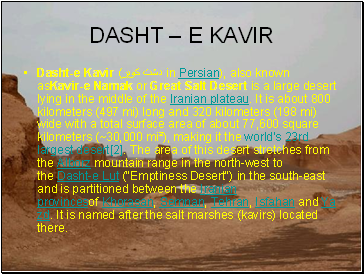 Dasht-e Kavir (دشت كوير in Persian), also known asKavir-e Namak or Great Salt Desert is a large desert lying in the middle of the Iranian plateau. It is about 800 kilometers (497 mi) long and 320 kilometers (198 mi) wide with a total surface area of about 77,600 square kilometers (~30,000 mi²), making it the world's 23rd largest desert[2]. The area of this desert stretches from the Alborz mountain range in the north-west to the Dasht-e Lut ("Emptiness Desert") in the south-east and is partitioned between the Iranian provincesof Khorasan, Semnan, Tehran, Isfahan and Yazd. It is named after the salt marshes (kavirs) located there. 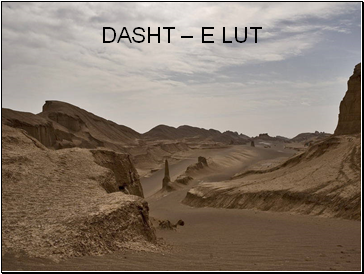 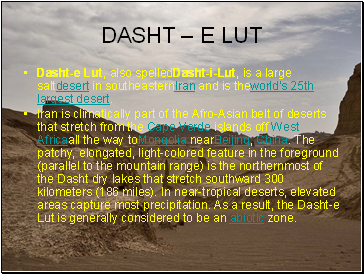 Iran is climatically part of the Afro-Asian belt of deserts that stretch from the Cape Verde islands off West Africaall the way toMongolia nearBeijing, China. The patchy, elongated, light-colored feature in the foreground (parallel to the mountain range) is the northernmost of the Dasht dry lakes that stretch southward 300 kilometers (186 miles). In near-tropical deserts, elevated areas capture most precipitation. As a result, the Dasht-e Lut is generally considered to be an abiotic zone. 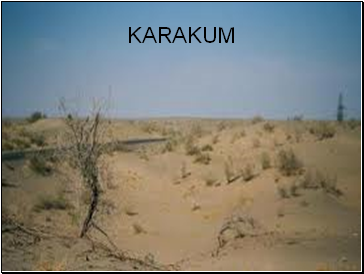 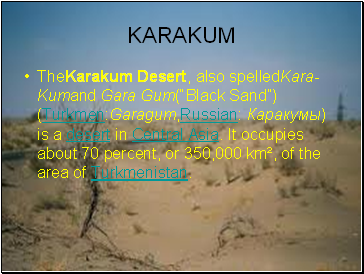 TheKarakum Desert, also spelledKara-Kumand Gara Gum(“Black Sand”) (Turkmen:Garagum,Russian: Каракумы) is a desert in Central Asia. It occupies about 70 percent, or 350,000 km², of the area of Turkmenistan. 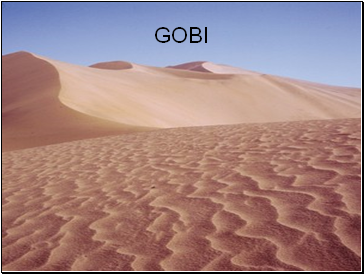