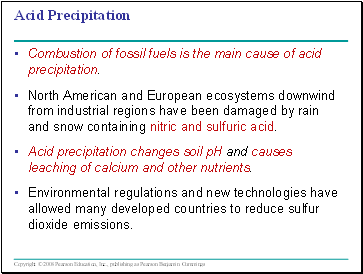 Combustion of fossil fuels is the main cause of acid precipitation.

North American and European ecosystems downwind from industrial regions have been damaged by rain and snow containing nitric and sulfuric acid.

Acid precipitation changes soil pH and causes leaching of calcium and other nutrients. 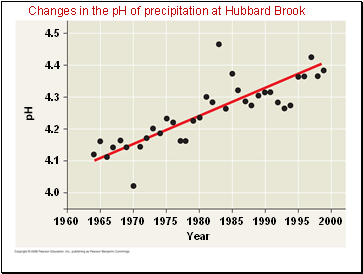 Changes in the pH of precipitation at Hubbard Brook 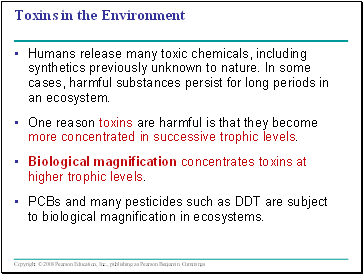 Toxins in the Environment

Humans release many toxic chemicals, including synthetics previously unknown to nature. In some cases, harmful substances persist for long periods in an ecosystem.

One reason toxins are harmful is that they become more concentrated in successive trophic levels.

PCBs and many pesticides such as DDT are subject to biological magnification in ecosystems. 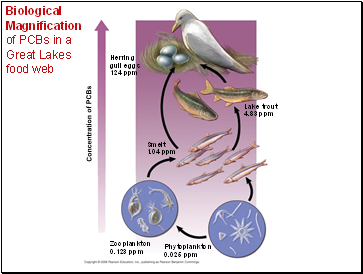 Biological Magnification of PCBs in a Great Lakes food web 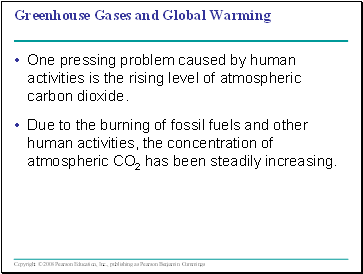 One pressing problem caused by human activities is the rising level of atmospheric carbon dioxide.

Due to the burning of fossil fuels and other human activities, the concentration of atmospheric CO2 has been steadily increasing. 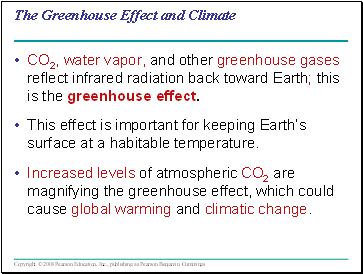 The Greenhouse Effect and Climate

CO2, water vapor, and other greenhouse gases reflect infrared radiation back toward Earth; this is the greenhouse effect.

This effect is important for keeping Earth’s surface at a habitable temperature.

Increased levels of atmospheric CO2 are magnifying the greenhouse effect, which could cause global warming and climatic change. 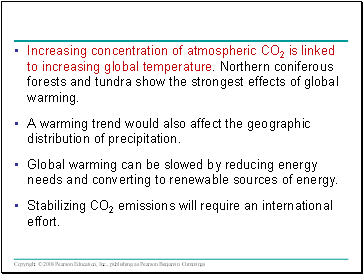 A warming trend would also affect the geographic distribution of precipitation.