On 12 July 1943, the Soviets launched their own counter-offensives, thereby dispelling any hopes of the German Army for victory or even stalemate in the east.

The Soviet victory at Kursk heralded the downfall of German superiority,giving the Soviet Union the initiative on the Eastern Front.

The Germans attempted to stabilise their eastern front along the hastily fortified Panther-Wotan line, however, the Soviets broke through it at Smolensk and by the Lower Dnieper Offensives. 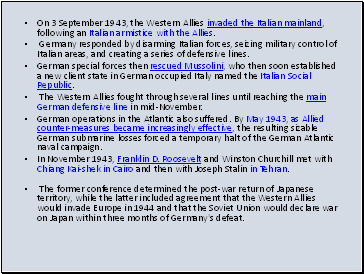 On 3 September 1943, the Western Allies invaded the Italian mainland, following an Italian armistice with the Allies.

The Western Allies fought through several lines until reaching the main German defensive line in mid-November.

In November 1943, Franklin D. Roosevelt and Winston Churchill met with Chiang Kai-shek in Cairo and then with Joseph Stalin in Tehran.

The former conference determined the post-war return of Japanese territory, while the latter included agreement that the Western Allies would invade Europe in 1944 and that the Soviet Union would declare war on Japan within three months of Germany's defeat. 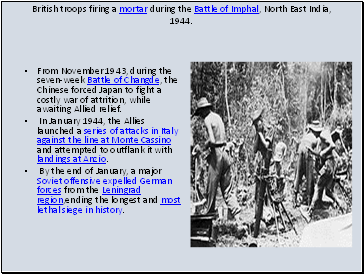 British troops firing a mortar during the Battle of Imphal, North East India, 1944.

From November 1943, during the seven-week Battle of Changde, the Chinese forced Japan to fight a costly war of attrition, while awaiting Allied relief.

In January 1944, the Allies launched a series of attacks in Italy against the line at Monte Cassino and attempted to outflank it with landings at Anzio.

By the end of January, a major Soviet offensive expelled German forces from the Leningrad region,ending the longest and most lethal siege in history. 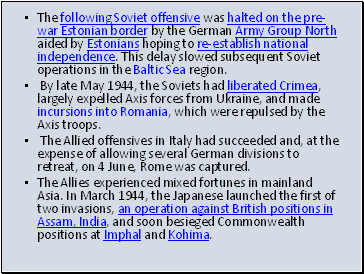 The following Soviet offensive was halted on the pre-war Estonian border by the German Army Group North aided by Estonians hoping to re-establish national independence. This delay slowed subsequent Soviet operations in the Baltic Sea region.

By late May 1944, the Soviets had liberated Crimea, largely expelled Axis forces from Ukraine, and made incursions into Romania, which were repulsed by the Axis troops.

The Allied offensives in Italy had succeeded and, at the expense of allowing several German divisions to retreat, on 4 June, Rome was captured.