At the start of the war, most commanders thought enemy tanks should be met by tanks with superior specifications.This idea was challenged by the poor performance of the relatively light early tank guns against armour, and German doctrine of avoiding tank-versus-tank combat. This, along with Germany's use of combined arms, were among the key elements of their highly successful blitzkrieg tactics across Poland and France.Many means of destroying tanks, including indirect artillery, anti-tank guns (both towed and self-propelled), mines, short-ranged infantry antitank weapons, and other tanks were utilised.Even with large-scale mechanisation, infantry remained the backbone of all forces,and throughout the war, most infantry were equipped similarly to World War I. 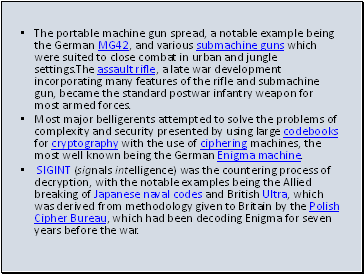 The portable machine gun spread, a notable example being the German MG42, and various submachine guns which were suited to close combat in urban and jungle settings.The assault rifle, a late war development incorporating many features of the rifle and submachine gun, became the standard postwar infantry weapon for most armed forces.

Most major belligerents attempted to solve the problems of complexity and security presented by using large codebooks for cryptography with the use of ciphering machines, the most well known being the German Enigma machine.

SIGINT (signals intelligence) was the countering process of decryption, with the notable examples being the Allied breaking of Japanese naval codes and British Ultra, which was derived from methodology given to Britain by the Polish Cipher Bureau, which had been decoding Enigma for seven years before the war. 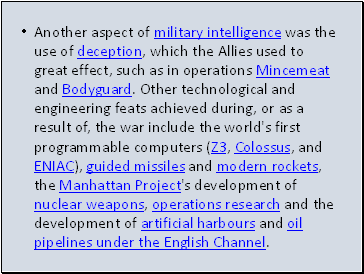 Another aspect of military intelligence was the use of deception, which the Allies used to great effect, such as in operations Mincemeat and Bodyguard. Other technological and engineering feats achieved during, or as a result of, the war include the world's first programmable computers (Z3, Colossus, and ENIAC), guided missiles and modern rockets, the Manhattan Project's development of nuclear weapons, operations research and the development of artificial harbours and oil pipelines under the English Channel. 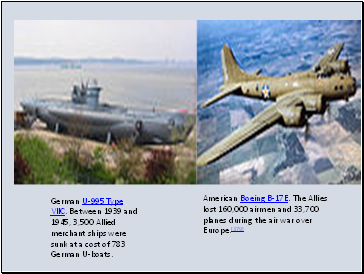 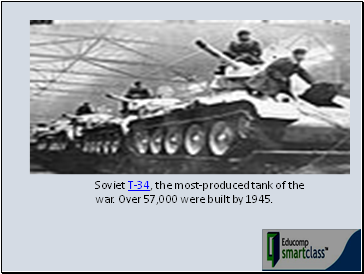 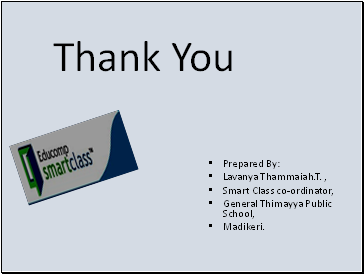