Less than three days after Mr. Collins’ proposal to her, Elizabeth is shocked to discover that Mr. Collins has made an offer or marriage to Charlotte Lucas, her best friend. 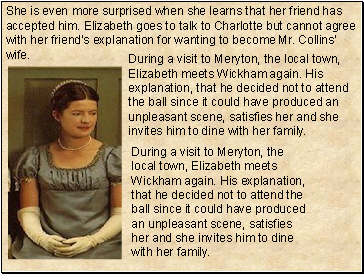 She is even more surprised when she learns that her friend has accepted him. Elizabeth goes to talk to Charlotte but cannot agree with her friend’s explanation for wanting to become Mr. Collins’ wife.

During a visit to Meryton, the local town, Elizabeth meets Wickham again. His explanation, that he decided not to attend the ball since it could have produced an unpleasant scene, satisfies her and she invites him to dine with her family.

During a visit to Meryton, the local town, Elizabeth meets Wickham again. His explanation, that he decided not to attend the ball since it could have produced an unpleasant scene, satisfies her and she invites him to dine with her family. 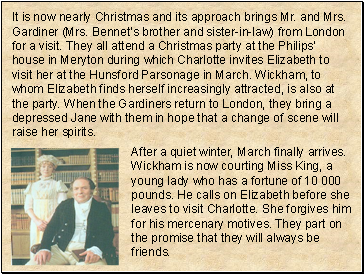 It is now nearly Christmas and its approach brings Mr. and Mrs. Gardiner (Mrs. Bennet’s brother and sister-in-law) from London for a visit. They all attend a Christmas party at the Philips’ house in Meryton during which Charlotte invites Elizabeth to visit her at the Hunsford Parsonage in March. Wickham, to whom Elizabeth finds herself increasingly attracted, is also at the party. When the Gardiners return to London, they bring a depressed Jane with them in hope that a change of scene will raise her spirits.

After a quiet winter, March finally arrives. Wickham is now courting Miss King, a young lady who has a fortune of 10 000 pounds. He calls on Elizabeth before she leaves to visit Charlotte. She forgives him for his mercenary motives. They part on the promise that they will always be friends. 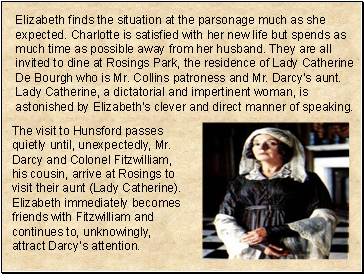 Elizabeth finds the situation at the parsonage much as she expected. Charlotte is satisfied with her new life but spends as much time as possible away from her husband. They are all invited to dine at Rosings Park, the residence of Lady Catherine De Bourgh who is Mr. Collins patroness and Mr. Darcy’s aunt. Lady Catherine, a dictatorial and impertinent woman, is astonished by Elizabeth’s clever and direct manner of speaking. 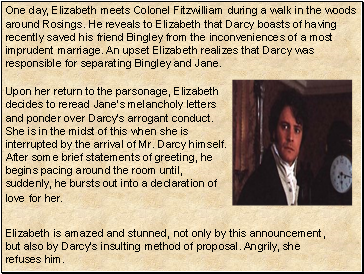 One day, Elizabeth meets Colonel Fitzwilliam during a walk in the woods around Rosings. He reveals to Elizabeth that Darcy boasts of having recently saved his friend Bingley from the inconveniences of a most imprudent marriage. An upset Elizabeth realizes that Darcy was responsible for separating Bingley and Jane.