Assumes every electron to be on its own experiencing an effective nuclear charge, Zeff 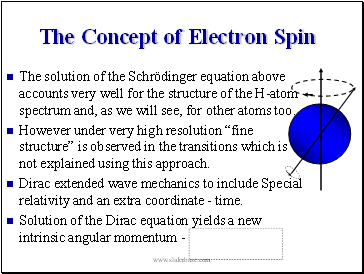 The Concept of Electron Spin

The solution of the Schrödinger equation above accounts very well for the structure of the H-atom spectrum and, as we will see, for other atoms too.

However under very high resolution “fine structure” is observed in the transitions which is not explained using this approach.

Dirac extended wave mechanics to include Special relativity and an extra coordinate - time. 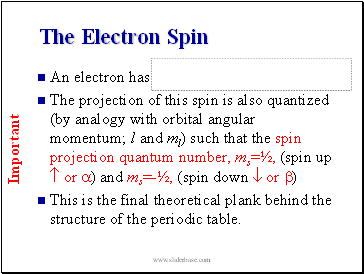 The projection of this spin is also quantized (by analogy with orbital angular momentum; l and ml) such that the spin projection quantum number, ms=½, (spin up  or a) and ms=-½, (spin down  or b)

This is the final theoretical plank behind the structure of the periodic table. 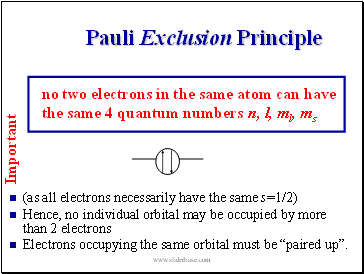 (as all electrons necessarily have the same s=1/2)

Hence, no individual orbital may be occupied by more than 2 electrons

Electrons occupying the same orbital must be “paired up”.

no two electrons in the same atom can have the same 4 quantum numbers n, l, ml, ms 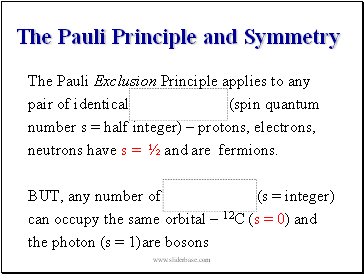 The Pauli Principle and Symmetry

The Pauli Exclusion Principle applies to any

neutrons have s = ½ and are fermions. 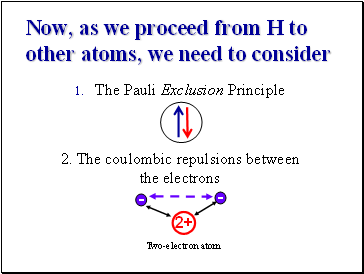 Now, as we proceed from H to other atoms, we need to consider

2. The coulombic repulsions between the electrons 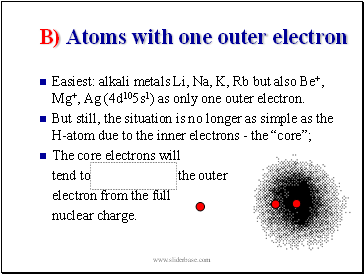 B) Atoms with one outer electron

But still, the situation is no longer as simple as the H-atom due to the inner electrons - the “core”;