The existence of inversion was first detected by Strutevant and Plunkett in 1926.

Inversion occur when parts of chromosomes become detached , turn through 1800 and are reinserted in such a way that the genes are in reversed order.

For example, a certain segment may be broken in two places, and the breaks may be in close proximity because of chance loop in the chromosome.

When they rejoin, the wrong ends may become connected.

The part on one side of the loop connects with broken end different from the one with which it was formerly connected.

This leaves the other two broken ends to become attached.

The part within the loop thus becomes turned around or inverted. 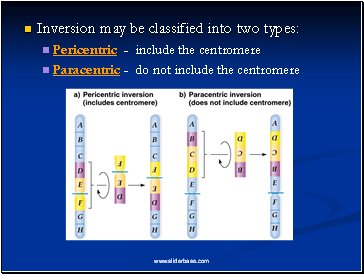 Inversion may be classified into two types:

Pericentric - include the centromere

Paracentric - do not include the centromere 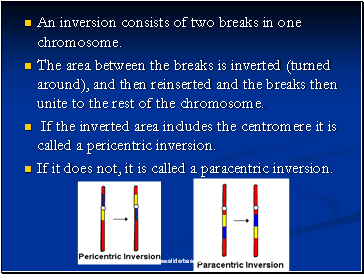 An inversion consists of two breaks in one chromosome.

The area between the breaks is inverted (turned around), and then reinserted and the breaks then unite to the rest of the chromosome.

If the inverted area includes the centromere it is called a pericentric inversion.

If it does not, it is called a paracentric inversion. 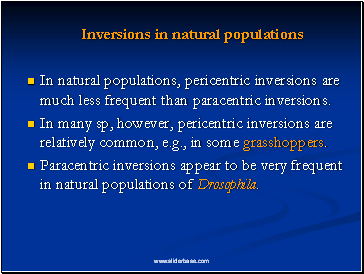 In many sp, however, pericentric inversions are relatively common, e.g., in some grasshoppers.

Paracentric inversions appear to be very frequent in natural populations of Drosophila. 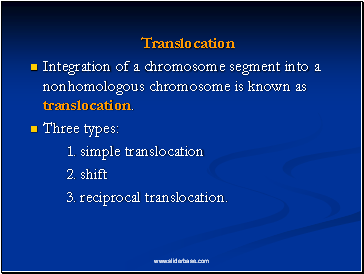 Integration of a chromosome segment into a nonhomologous chromosome is known as translocation. 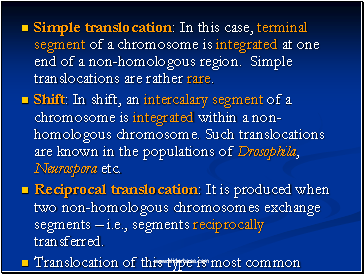 Shift: In shift, an intercalary segment of a chromosome is integrated within a non-homologous chromosome. Such translocations are known in the populations of Drosophila, Neurospora etc.

Translocation of this type is most common 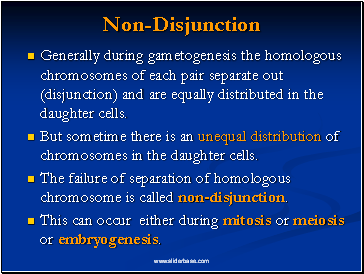 Generally during gametogenesis the homologous chromosomes of each pair separate out (disjunction) and are equally distributed in the daughter cells.