But sometime there is an unequal distribution of chromosomes in the daughter cells.

The failure of separation of homologous chromosome is called non-disjunction.

This can occur either during mitosis or meiosis or embryogenesis. 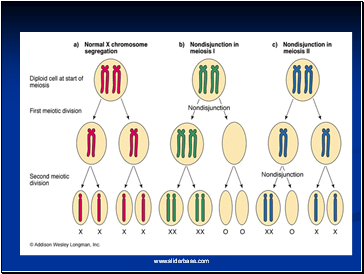 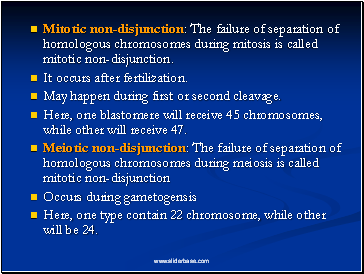 It occurs after fertilization.

May happen during first or second cleavage.

Here, one type contain 22 chromosome, while other will be 24. 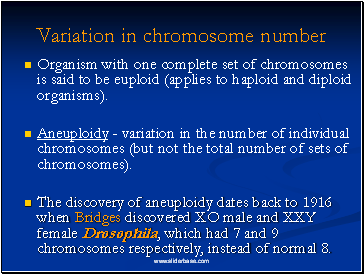 Organism with one complete set of chromosomes is said to be euploid (applies to haploid and diploid organisms).

Aneuploidy - variation in the number of individual chromosomes (but not the total number of sets of chromosomes).

The discovery of aneuploidy dates back to 1916 when Bridges discovered XO male and XXY female Drosophila, which had 7 and 9 chromosomes respectively, instead of normal 8. 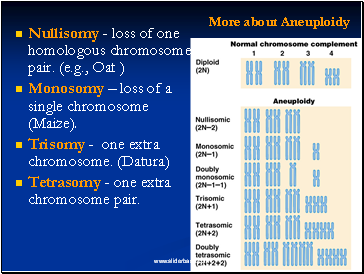 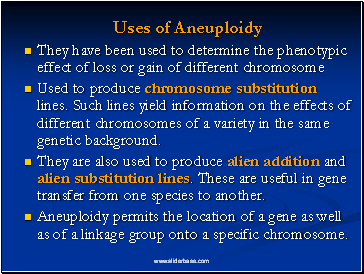 Used to produce chromosome substitution lines. Such lines yield information on the effects of different chromosomes of a variety in the same genetic background.

They are also used to produce alien addition and alien substitution lines. These are useful in gene transfer from one species to another.

Aneuploidy permits the location of a gene as well as of a linkage group onto a specific chromosome. 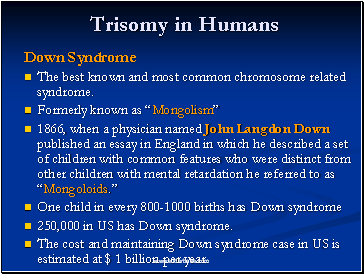 The best known and most common chromosome related syndrome.

1866, when a physician named John Langdon Down published an essay in England in which he described a set of children with common features who were distinct from other children with mental retardation he referred to as “Mongoloids.”