On the other hand, CsCl density-gradient analysis of DNA from eukaryotes usually reveals the presence of one large band of DNA (usually called “Mainband” DNA) and one to several small bands.

These small bands are referred to as “Satellite DNAs”. 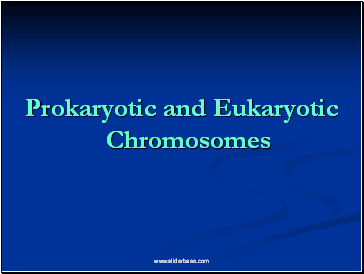 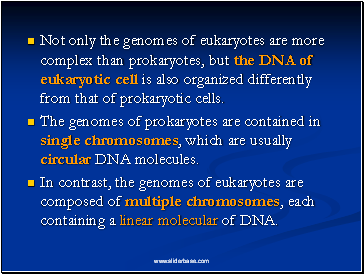 The genomes of prokaryotes are contained in single chromosomes, which are usually circular DNA molecules.

In contrast, the genomes of eukaryotes are composed of multiple chromosomes, each containing a linear molecular of DNA. 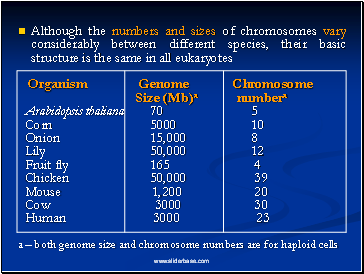 Although the numbers and sizes of chromosomes vary considerably between different species, their basic structure is the same in all eukaryotes

a – both genome size and chromosome numbers are for haploid cells 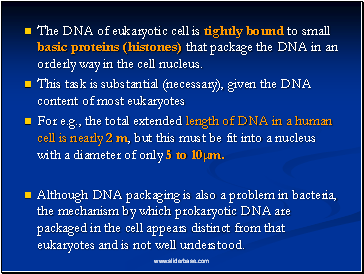 The DNA of eukaryotic cell is tightly bound to small basic proteins (histones) that package the DNA in an orderly way in the cell nucleus.

This task is substantial (necessary), given the DNA content of most eukaryotes

For e.g., the total extended length of DNA in a human cell is nearly 2 m, but this must be fit into a nucleus with a diameter of only 5 to 10µm.

Although DNA packaging is also a problem in bacteria, the mechanism by which prokaryotic DNA are packaged in the cell appears distinct from that eukaryotes and is not well understood. 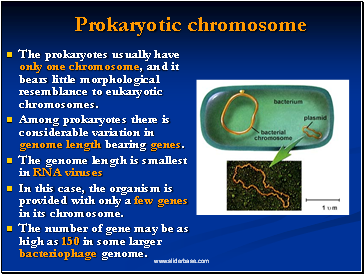 The prokaryotes usually have only one chromosome, and it bears little morphological resemblance to eukaryotic chromosomes.

Among prokaryotes there is considerable variation in genome length bearing genes.

The genome length is smallest in RNA viruses

In this case, the organism is provided with only a few genes in its chromosome.

The number of gene may be as high as 150 in some larger bacteriophage genome. 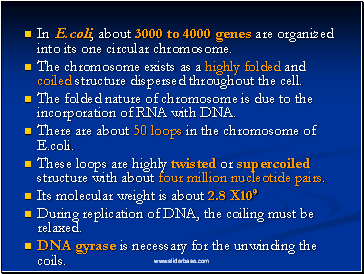 In E.coli, about 3000 to 4000 genes are organized into its one circular chromosome.

The chromosome exists as a highly folded and coiled structure dispersed throughout the cell.