The name of the syndrome came from a catlike mewing cry from small weak infants with the disorder.

Another human disorder that is associated with a chromosome abnormality is chronic myelocytic leukemia.

A deletion of chromosome 22 was described by P.C.Nowell and Hungerford and was called “Philadelphia” (Ph’) chromosome after the city in which the discovery was made. 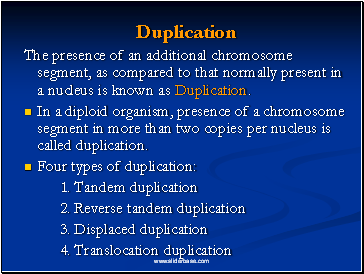 The presence of an additional chromosome segment, as compared to that normally present in a nucleus is known as Duplication.

In a diploid organism, presence of a chromosome segment in more than two copies per nucleus is called duplication. 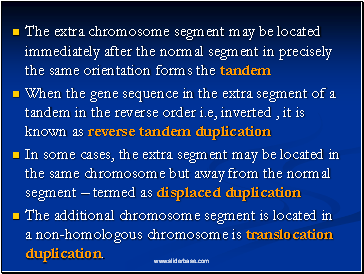 When the gene sequence in the extra segment of a tandem in the reverse order i.e, inverted , it is known as reverse tandem duplication

In some cases, the extra segment may be located in the same chromosome but away from the normal segment – termed as displaced duplication

The additional chromosome segment is located in a non-homologous chromosome is translocation duplication. 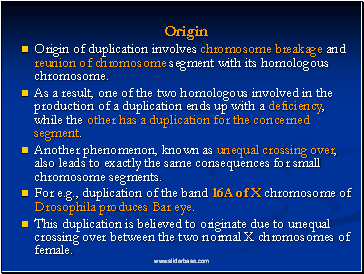 Origin of duplication involves chromosome breakage and reunion of chromosome segment with its homologous chromosome.

As a result, one of the two homologous involved in the production of a duplication ends up with a deficiency, while the other has a duplication for the concerned segment.

Another phenomenon, known as unequal crossing over, also leads to exactly the same consequences for small chromosome segments.

For e.g., duplication of the band 16A of X chromosome of Drosophila produces Bar eye.

This duplication is believed to originate due to unequal crossing over between the two normal X chromosomes of female. 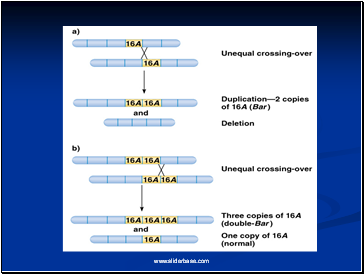 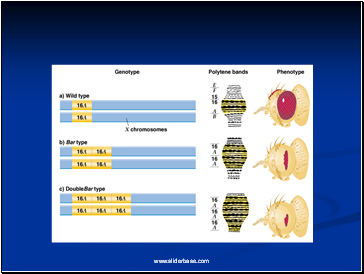 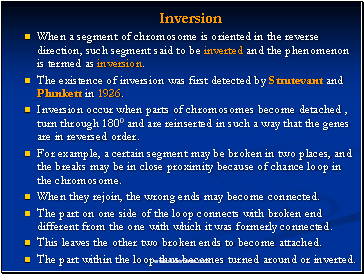 When a segment of chromosome is oriented in the reverse direction, such segment said to be inverted and the phenomenon is termed as inversion.