Which chromosome is inactive is a matter of chance, but once an X has become inactivated , all cells arising from that cell will keep the same inactive X chromosome.

In the mouse, the inactivation apparently occurs in early in development

In human embryos, sex chromatin bodies have been observed by the 16th day of gestation. 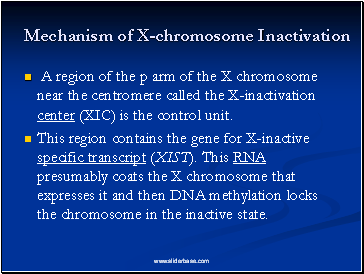 A region of the p arm of the X chromosome near the centromere called the X-inactivation center (XIC) is the control unit.

This region contains the gene for X-inactive specific transcript (XIST). This RNA presumably coats the X chromosome that expresses it and then DNA methylation locks the chromosome in the inactive state. 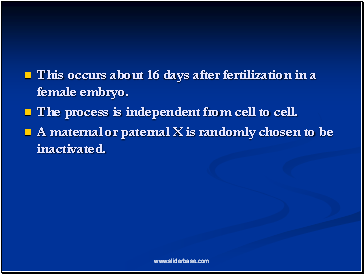 This occurs about 16 days after fertilization in a female embryo.

The process is independent from cell to cell.

A maternal or paternal X is randomly chosen to be inactivated. 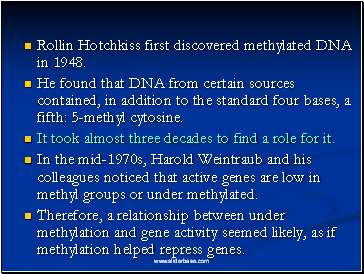 He found that DNA from certain sources contained, in addition to the standard four bases, a fifth: 5-methyl cytosine.

It took almost three decades to find a role for it.

In the mid-1970s, Harold Weintraub and his colleagues noticed that active genes are low in methyl groups or under methylated.

Therefore, a relationship between under methylation and gene activity seemed likely, as if methylation helped repress genes. 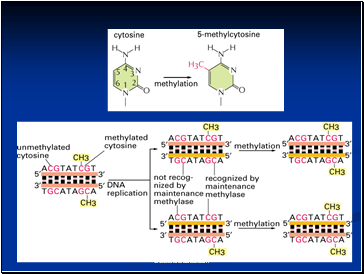 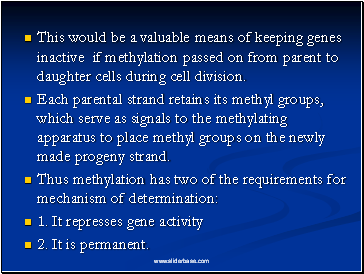 This would be a valuable means of keeping genes inactive if methylation passed on from parent to daughter cells during cell division.

Each parental strand retains its methyl groups, which serve as signals to the methylating apparatus to place methyl groups on the newly made progeny strand.

Thus methylation has two of the requirements for mechanism of determination: 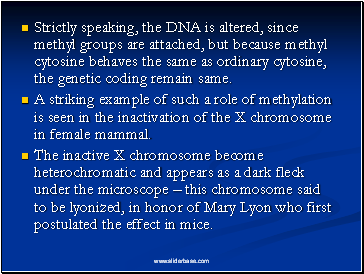 Strictly speaking, the DNA is altered, since methyl groups are attached, but because methyl cytosine behaves the same as ordinary cytosine, the genetic coding remain same.

A striking example of such a role of methylation is seen in the inactivation of the X chromosome in female mammal.

The inactive X chromosome become heterochromatic and appears as a dark fleck under the microscope – this chromosome said to be lyonized, in honor of Mary Lyon who first postulated the effect in mice. 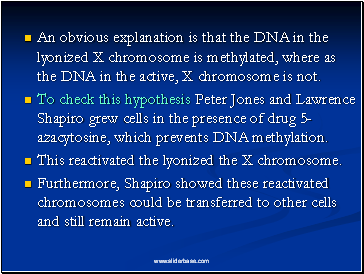