Consider a normal chromosome with genes in alphabetical order: a b c d e f g h i

1. Deletion: part of the chromosome has been removed: a b c g h i

2. Dupliction: part of the chromosome is duplicated:

3. Inversion: part of the chromosome has been re-inserted in reverse order: a b c f e d g h i

ring: the ends of the chromosome are joined together to make a ring 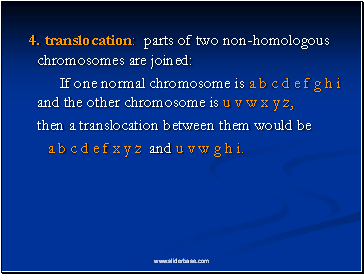 then a translocation between them would be 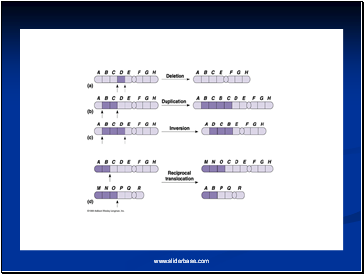 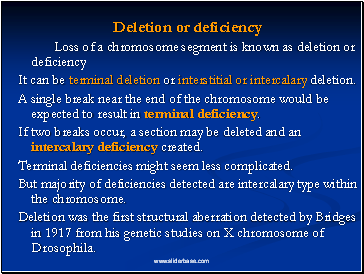 Loss of a chromosome segment is known as deletion or deficiency

It can be terminal deletion or interstitial or intercalary deletion.

A single break near the end of the chromosome would be expected to result in terminal deficiency.

If two breaks occur, a section may be deleted and an intercalary deficiency created.

But majority of deficiencies detected are intercalary type within the chromosome.

Deletion was the first structural aberration detected by Bridges in 1917 from his genetic studies on X chromosome of Drosophila. 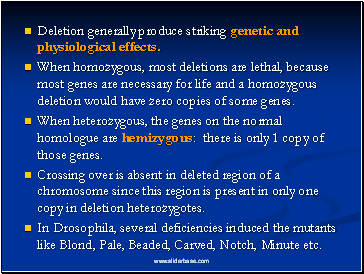 When homozygous, most deletions are lethal, because most genes are necessary for life and a homozygous deletion would have zero copies of some genes.

When heterozygous, the genes on the normal homologue are hemizygous: there is only 1 copy of those genes.

Crossing over is absent in deleted region of a chromosome since this region is present in only one copy in deletion heterozygotes. 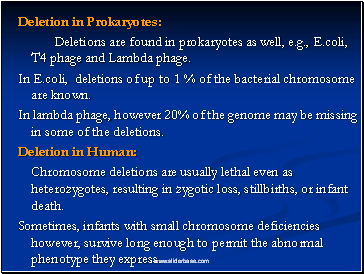 In E.coli, deletions of up to 1 % of the bacterial chromosome are known.

In lambda phage, however 20% of the genome may be missing in some of the deletions.

Chromosome deletions are usually lethal even as heterozygotes, resulting in zygotic loss, stillbirths, or infant death. 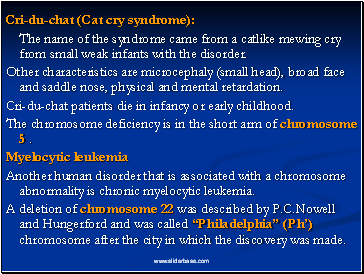